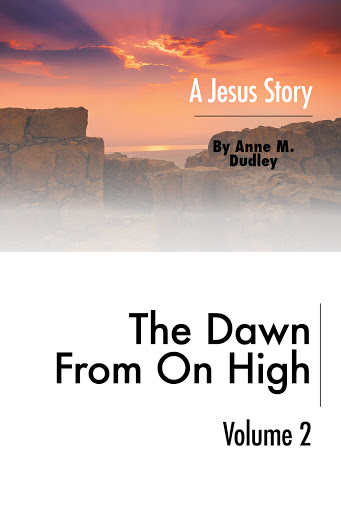 The Dawn from on High
A Jesus Story Volume II
by Anne M. Dudley

The story of Jesus’ life has remained frozen and stagnant in the perspective dictated by the first Christian Council of Nicea in 325 A.D. (C.E.) To this day, few Christians know any more than what is reported in the Gospels of the Bible. Unfortunately, even fewer know that new discoveries, mostly from the 19th and 20th centuries, have been found revealing much more about the man called Jesus from the 1st century. Yet even in these post-modern times, the new information has been shrouded in secrecy and organized religion doesn’t seek change or new insight on this subject.

“The Dawn from on High” is a series of nine novels following the sequential life of Jesus. No new information is censored and no old information is withdrawn. Rather, all the information is knit together in a story written for the 21st century reader. It has been written and guided by an ancient rabbinic principle known as the Halakic Principle which incorporates a ‘both/and’ technique rather than the ‘either/or’ discipline used by the founders of the Christian religion.

Jesus said, “Ask; and it will be given to you, Seek; and you will find, Knock; and the door will be opened to you.” The challenge has been given to each of us. If we accept it, we will learn more than we ever thought possible!

I was born on December 24, in 1952, to missionary parents working in Nigeria, West Africa. From there, our family, (I had four siblings) moved around quite a lot. Interestingly, none of the five children were born on American soil because from Nigeria, we moved to Toronto, Canada, then Chicago, and New York City.

I was the only child from my family to graduate from a New York City high school. As my parents moved on, I stayed behind to attend college, receiving a BA degree in education. I graduated from Concordia College, Bronxville, New York.

From New York, I moved to Baltimore and taught grade three in a parochial school. From there I worked as a youth minister in a large church in Silver Spring, MD. It was here that I entered graduate studies at the University of Maryland. I met my husband, Alan, and we married in 1981. I left youth ministry work and returned to school teaching in the D.C. area and continued graduate studies.

I became pregnant with our first child and my husband and I decided we needed to leave the Washington D.C. area. We came to settle in Gettysburg, Pennsylvania. Shortly thereafter, we moved into our first and only home located in Arendtsville, PA, seven miles northwest of Gettysburg. Arendtsville is a sleepy, little town of approximately 700 residents. The town is surrounded by beautiful rolling hills filled with apple, cherry, and peach orchards. (I’ve been told by the ‘historians’ of the town that during the terrible three-day battle of Gettysburg in 1863, Arendtsville remained untouched.)

I finished graduate school and received a Master’s Degree in Education and Human Development whereupon I began to receive requests from people to provide counseling therapy. Since, I have worked as a private counselor/therapist in my home.

Since then, our second child was born. I have worked as a private counselor therapist in my home.

Today, my two children, a daughter and a son, have married and moved away to start their own families. I have been blessed with two grandchildren and wouldn’t mind more. My husband and I have remained in our Arendtsville home for 30 years and we celebrated 33 years of marriage in October of 2014. Life is Good!