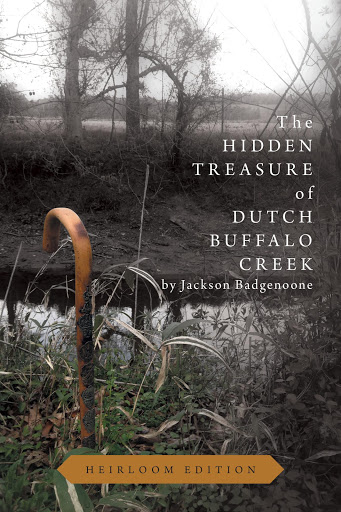 An eight year old boy named James, aka the wannabe Cisco Kid, nearly lost his life as he searched for precious metal in a bone dry southwest Arizona gulley. He retrieved only pyrite before a desert flood swept away his world.

Over the course of half a century James acquired several additional nicknames. They were reflections of his multiple personalities. His dad called him Traveler or Trav. Some coworkers referred to him as Point Man. A few colleagues labeled him Knowledge Navigator or Nav.

Under the cool, shimmering waters of Dutch Buffalo Creek, in 2014 A.D., Trav came upon a rusty bayonet. It was buried long ago in the Carolina Piedmont. This discovery is no coincidence; indeed, this bayonet is a symbol of the abundant riches found in the river of history that connects both the past and future. The blade reminded Point Man that all that glitters is not gold. Nav expanded the search for real treasure beyond the water’s edge.

The blade was a catalyst that drove James to sift through a lifetime of artifacts and bittersweet memories. He found riches from the past and caught a glimpse of the future. Just as the bayonet glimmered in the depths of the water, so does the ongoing work of his family’s unseen witnesses, the Neverborn. They reveal ancient treasures that go far beyond mere gold and silver.

James is guided into a deeper understanding that he and countless loved ones have been called by name as spoken by the prophet Isaiah: I have summoned you by name; you are mine. When you pass through the waters, I will be with you.

Your search for real treasure begins when you realize that you are called by name. You are special in the eyes of your Creator. Your spiritual wealth will overcome all of the conflict and competition that troubles the waters in your life.

Jackson Badgenoone emerges from the wind and clouds, whispering to the thoughts of her extended family. As one of the Neverborn, she has borne witness to the lives of specific individuals for countless years, acting as a faithful recorder of events and significant moments. The Hidden Treasure of Dutch Buffalo Creek is one of many books which she has penned alongside her kindred Neverborn spirits. She is an avid researcher and ghostwriter, and continues to document the high water markers of her beloved clan to this very day. Learn more about the author at www.hiddentreasurenovels.com.