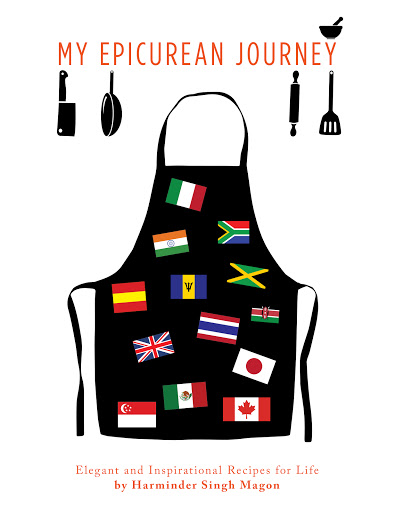 Take a journey through South Asia, the Far East, Africa, and beyond as gourmet Harminder Singh Magon presents his collection of global recipes, kindled by a lifetime of culinary exploration. Featured are delicacies as eclectic as their origins: inspired by roadside vendors and street bazaars; renowned restaurants and master chefs, and heirloom traditions perfected in family kitchens across generations, the dishes found here will entice even the pickiest palate. Exotic spices, textures, and flavours blend harmoniously to create delectable kebabs, scrumptious noodles, zesty veggies, mouthwatering biryanis, and much more to serve on any occasion. Complete with step-by-step, easy-to-follow instructions and full-colour images, My Epicurean Journey is sure to be a delight for family, friends, novice cooks, and food connoisseurs alike!

Harminder Singh Magon is a third-generation Punjabi Sikh from Kenya. His love of fine foods took root at an early age, during which time his forefathers introduced him to the centuries-old culinary traditions of the Moghul era. After pursuing higher studies in India, Magon emigrated to and eventually settled in Canada, where he served as a city planner in Saskatoon for two decades before eventually joining the Canadian Union of Public Employees as its National Anti-Racism Coordinator. All the while, he continued to further cultivate his passion for food by shadowing master chefs, teaching cooking classes, and hosting and producing the popular television program Cook with Mag for almost a decade. Additionally, Harminder Singh Magon has had the honour and privilege of cooking for several renowned Indian celebrities, offering cooking demonstrations for the general public and for charity, and catering for his nieces’ weddings, which included well over five hundred guests each. Magon, now a proud grandfather, currently resides in Ottawa with his wife Sona.