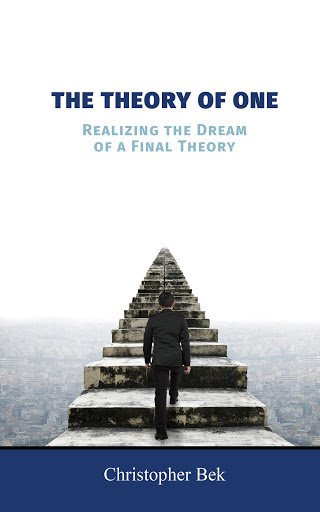 Christopher Bek has produced a revolutionary physics theory and claims that this theory of one (2001) solves the greatest scientific problem of all time by uniting relativity theory (1905) with quantum theory (1925). According to Bek, it proves that the universe is bounded at light speed and Planck's constant, that there is only one photon (i.e. a being of light), that one photon is God, and that reality is an illusion--meaning the moon does not exist when no one is looking at it. He says that physicists are ignoring the theory because it effectively pulls-their-pants-down. The theory is dead simple and can be explained in just a few minutes.

The theory of one brings the reader face to face with the stunning realization that the universe is bounded—rather than unbounded, as Einstein and others have asserted. The theory of one delivers the ocean. It is the theory that spells the end of physics. It is the monolith of 2001—a spacetime odyssey.

I know not what the world thinks of me, but as for myself, I seem to be only a boy playing on the seashore, now and again finding a smoother stone or a more beautiful shell—all the while the great ocean of truth lies undiscovered before me.

The final theory of everything will undoubtedly be a mathematical system of uncommon tidiness and rigor that accommodates the physical facts of the universe as we know it. The mathematical neatness will arrive first followed by its explanatory power. Perhaps one day physicists will find a theory of such compelling beauty that its truth cannot be denied—truth will be beauty and beauty will be truth. The theory will be, in precise terms, a myth. A myth is a story that makes sense on its own terms, offers explanations of everything we see before us, but can neither be disproved nor tested. This theory of everything will indeed spell the end of physics. It will be the end not because physics has been able to explain everything, but because physics has at last reached the end of all the things for which it has the power to explain.

—Conclusion of The End of Physics (1993) by David Lindley.

I only have one word to describe The Theory of One book—WOW. I will have a lot to think about tonight. I believe I know why Big Science is not disputing or contesting you—if they proved you correct it would totally shred the billions they earn off the misled scientific trail they have taken us on. It would also totally destroy the notion of religion being in place for our benefit. One thing I've learned very well in my 37 years is that when you are wrong the world is fast and efficient about publicly proving you wrong—but when you are right, they hide the truth because it takes their power and control away. Your theory makes all things possible considered on a metaphysical level. And in addition, it proves they have held us back scientifically in order to become wealthy and powerful by their own ideas, inventions and limitations. Furthermore, based on your theory, my own ideas seem much more plausible as well. Outstanding book and theory, Chris. Just—WOW. Thank you very much for the theory of one.

Christopher Bek is a mathematician, actuary, philosopher, scientist and writer—and is a superior spreadsheet, database and riskmodeling craftsman. He has consulted to the top executives of one of the largest companies in Canada—and has made presentations relating to the philosophy and science of risk management in Houston and New York. Chris founded Risk Management Services in 1995 dedicated to helping executives develop scientific management practices that allow organizations to properly serve the shareholders, the stakeholders and society in the community.

After producing twenty Risk Management Review essays, Chris shifted to Philosophymagazine essays and now produces a new 1,600-word essay every month and has written 60 essays to date. Starting with his Theory of One in 2001, Chris has written essays on a wide range of subjects including Relativity Theory, Quantum Theory, Portfolio Theory, Existentialism, Ontology, Schizophrenia, Paradigm Shifts, Art and Moral Choice, The Illusion of Reality, and Determinism and Freewill. He is proposing that his essay format could be the standard model for making and responding to arguments.