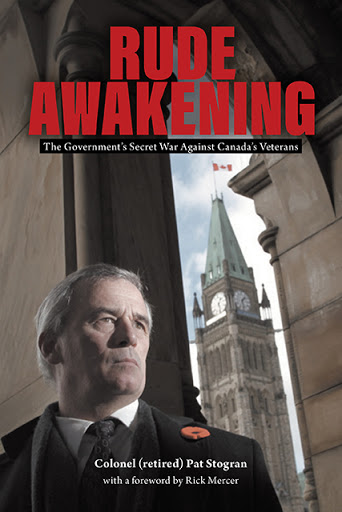 Following a military career of over thirty years, which includes deployments to Bosnia and Afghanistan, Colonel Pat Stogran becomes Canada’s first Veterans Ombudsman. The new Office of the Veterans Ombudsman is intended to be a symbol of Canada’s commitment to the members and veterans of the Canadian Forces, who accept unlimited liability in the service of our country and often make traumatic, life-altering sacrifices. Colonel Stogran is proud to take the assignment, seeing it as an opportunity to give back to all those who serve. But in the next three years, as he encounters nothing but intransigence and malfeasance in the hallowed halls of government, he undergoes a rude awakening to the cesspool of callousness, deceit, and neglect that is the Government of Canada’s response to the needs of its veterans. Stogran’s exposure to the real Government of Canada, which is hidden from the view of mainstream Canadians, reveals that it is nothing like the myth that has been built up around it as a caring and committed model for the rest of the world. It is an experience he describes as more traumatic than the years he spent in war zones, and it will cause him to question what it really means to be a Canadian. Part shocking exposé, part dire and urgent warning, Rude Awakening reveals a culture of government that victimizes our veterans and could also very well threaten the quality of life we all enjoy as Canadians.

During the course of his long and honorable military career, Colonel Pat Stogran served as a United Nations Military Observer in Bosnia, where in 1994, he and his team were instrumental in saving the besieged enclave of Gorazde and its 45,000 inhabitants from a massacre at the hands of the Bosnian Serb Army. In the wake of 9/11, he led the Third Battalion Princess Patricia’s Canadian Light Infantry as it spearheaded the Canadian Forces historic mission in Afghanistan, marking the first occasion since the Korean War that Canada committed troops to ground combat operations against a declared enemy. Upon retirement from the military, Colonel Stogran served three years as Canada’s first Veterans Ombudsman, the experience he has chronicled in Rude Awakening. Having spent his entire adult life as a soldier, today he is committed to finding out who Pat the civilian is, and to giving back to his family who supported him so faithfully for so long through so much. In his retirement, Colonel Stogran occupies his time reading, writing, and talking about leadership. The Colonel hopes that by telling his story his knowledge and experience might serve to inspire the future leaders of Canada to reverse the alarming trend of corruption and incompetence that seems to have consumed our government. Colonel Stogran lives in Ottawa with his wife and children.

Rude Awakening has been nominated by our staff as one of their favorite books.