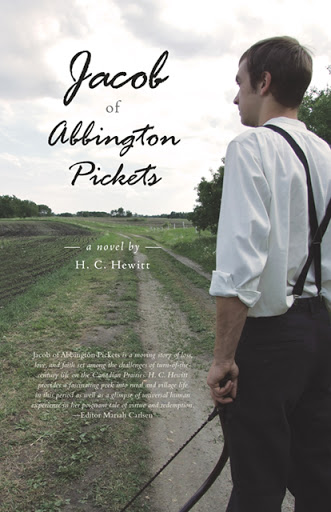 Just before the turn of the 20th century, Jacob Hudson grows up on a farm in the Canadian prairies, near the small village of Abbington Pickets. As a child, he witnesses an incident that scars him deeply and leaves him unable to trust or understand his strong, proud, and often harsh father. Shy Jacob grows into a handsome, talented young man still carrying a dark secret. Just when Jacob thinks he will never be able to follow his dreams, he meets Abigail, a beautiful, boastful English girl with a chip on her shoulder. His heart falls wide open, but she doesn’t give him the time of day. Unable to bear his father’s injustices, Jacob eventually leaves to work at a local ranch, where he finds kinship, acceptance, vocation, and—possibly—love.

When circumstances change, Jacob moves into the village. Despite the many wonderful things his new life brings, his existence in Abbington Pickets is not an easy one. Will this kind and virtuous young man ever find happiness? Will his relationship with his father find resolution? Jacob’s compelling story of loss, perseverance, and faith unfolds amidst the background of 19th-20th century rural Canada.

Jacob of Abbington Pickets is a moving story of loss, love, and faith set among the challenges of turn-of-the-century life on the Canadian Prairies. H. C. Hewitt provides a fascinating peek into rural and village life in this period as well as a glimpse of universal human experience in her poignant tale of virtue and redemption.

H. C. Hewitt grew up on a farm in southeastern Saskatchewan, where she developed a deep appreciation for the rural prairie landscape and the people who live there. She has been passionate about reading and writing from an early age and always knew that she would someday write a historical romance. Her grandmother’s extensive knowledge of Saskatchewan history and her grandfather’s collection of antiques sparked an enduring love of history, especially of the era in which her story unfolds. Her story’s setting, Jacob of Abbington Pickets, was inspired by a historic park near where she grew up, founded in 1882 by an Englishman who set out to create a Victorian village in Canada.

H. C. Hewitt’s other passion is quilting; she owns and operates a quilt shop, where she designs and makes quilt patterns. Her four children have grown up and moved away, giving her more time for writing and quilting. H. C. Hewitt lives in rural eastern-central Alberta with her husband, two dogs, three cats, and ten miniature donkeys.