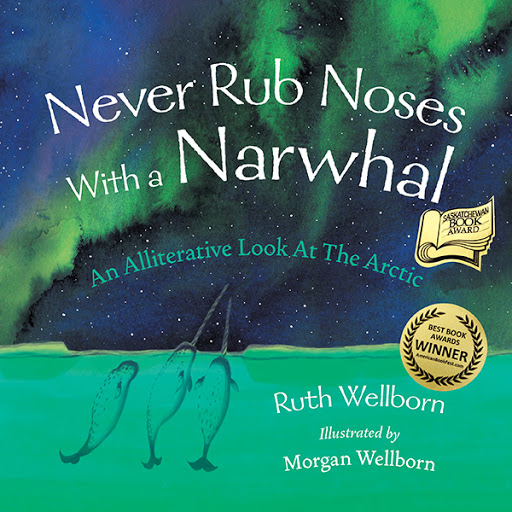 Blubbery belugas, capering caribou, lingering ladybugs, rummaging ravens, and waiting walruses, all make an appearance in this beautifully illustrated children's book about the Arctic. The map, a glossary of key words, and a page of interesting facts about the four unique territories in Northern North America, also make it educational. Older children will find it a fun and interesting read, and younger children will delight in the pictures, and the rhythmic and often amusing alliteration. This book will have universal appeal to teachers and students whether they live in the Arctic or more southerly climes.

Abecedarian children’s books are thick on the ground, but this one stands out for its unusual theme and unexpected vocabulary. For each letter (E and F plus X and Y are combined), the book provides a complete alliterative sentence that refers to the nature and culture of the four North American Arctic regions: Alaska, the Yukon, the Northwest Territories, and Nunavut.

... Full-color, nicely detailed illustrations show each element of the sentence in realistic, not cartoonish detail, making this book an excellent learning tool as well as beautiful."

Ruth Wellborn is an educator, who lives in Saskatoon, Saskatchewan. Her first exposure to belugas and polar bears was in Churchill Manitoba, when as a university student, she worked for the Canadian National Railway. She was immediately captivated, and has maintained that interest with many familial connections to the North. Her daughter, who lives in Yellowknife, encouraged the writing of this book. When not writing, she likes to create in the kitchen, her sewing room, and the workshop. Ruth and her husband happily share their home with two canine companions.