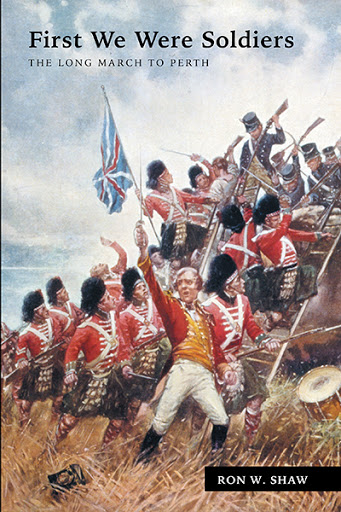 First We Were Soldiers
The Long March To Perth
by Ron W. Shaw

Between 1816 and 1819, more than 1,200 discharged British soldiers, from over 80 regiments of infantry, cavalry and artillery, the Royal Navy and miscellaneous support units were compensated for services to the Crown with settlement tickets for ‘waste land’ at the Perth (Ontario) Military Settlement. By 1822, when the Army passed administration of the scheme into civilian hands, these early settlers had been joined by hundreds more. They kept coming into the 1830s: veterans of the American Revolutionary War, the French Revolutionary War, the Napoleonic Wars, the 1798 Irish Rebellion, the American War of 1812-1814 and service in India and Burma.

In First We Were Soldiers Ron W. Shaw introduces us to a cross section of Perth’s Soldier-Settlers -- corrupt officers and illiterate Privates, heroes and deserters, wives rescuing wounded husbands from the battlefield, and children born on storm tossed troop ships or in POW camps. In the mix were English, Scots and Irish, as well as Swiss, French, Dutch, Polish, Sicilian and American.

Shaw portrays the lives of the men and their families, as they marched with the armies of Wellington and Prevost across the Iberian Peninsula and through the North American backwoods before finding themselves swinging an axe in the elm forests and cedar swamps north of the Rideau River.

A native of Perth, Ontario, Ron W. Shaw studied journalism at Algonquin College and worked for local newspapers, radio and television in northern and western Ontario for a decade before a 35 year career with non-governmental organization in Africa, Asia and the Middle East. He has previously published three books; ‘Black Light’ (1993), Ronsdale Press, a novella and collection of short stories, ‘Forgotten Hero’ (2012), self published, the biography of Alexander Fraser (1789-1872), the hero of the Battle of Stoney Creek (co-authored with M. E. Irene Spence), and ‘Tales of the Hare’ (2014), FriesenPress, the biography of French defector Francis Tito LeLievre (1755-1830) who served with distinction as a Captain in the Royal Newfoundland Fencibles through the War of 1812. Shaw is the descendant of seven of the soldier-settlers, discharged veterans of the Napoleonic Wars and the War of 1812 who were given land grants at the Perth (Ontario) Military Settlement from 1816.