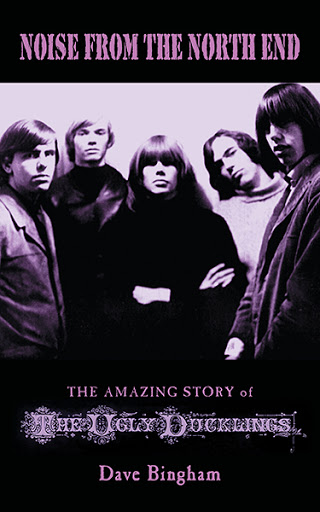 It was the 1960’s. The British Invasion was under way as The Who, Beatles and Rolling Stones dominated the top of the charts. In Canada, Toronto’s trending Yorkville district was attracting Canadian acts to its many coffee houses and nightclubs. In 1965, Canada’s Ugly Ducklings burst onto the music scene with their gritty garage-punk style and the rest is music history. Noise from the North End is a wild, energetic, original and enduring story of one rock band’s journey through Canada’s music scene, from smoky coffee houses to high school dances to bars and nightclubs throughout Canada in the 60s and 70s. It is also a compelling chronicle of a music industry often unwilling to get behind its talented and popular musicians and really promote them; to the extent some moved to the U.S. where their careers finally took off. Noise from the North End contains never before told anecdotes and never before seen photographs that explore a unique era in Canadian music.

“I was pretty blown away by Noise from the North End. So many juicy details filled in the colours of our collective past and the evolution of the Canadian music business. Bingham is a master storyteller, with a talent for weaving years of rock and roll history into concise and vivid depictions. They’re important stories too, for they are the ones that surely legitimize and strengthen our identities as Canadian music fans.”

“This book and our longevity as a band, is a testament to the fact that we never had to compromise our integrity.

People could tell that we were “for real”.”

Canadian singer-songwriter and harmonica player Dave Bingham has been part of the Canadian music scene for forty-eight years. His career highlights include opening for the likes of The Rolling Stones, The Animals, The Beach Boys, Wilson Pickett, Sam the Sham & The Pharoahs, The Grassroots, Gary Lewis and The Playboys, Jeff Healey, Goddo, Mandala, Lighthouse, Mahogany Rush, Edgar Winter, Albert King and King Biscuit Boy. He has also jammed with iconic artists Jimi Hendrix and Buddy Miles, Junior Wells and Buddy Guy and John Lee Hooker. The first album he recorded with his seminal band The Ugly Ducklings (Somewhere Outside) was voted #72 in “The Top 100 Canadian Albums” for the book of the same name, and the first single he recorded (Nothin’), which debuted the night he opened for The Rolling Stones, was voted #33 in “The Top 100 Canadian Singles”, for the book of the same name. This is his story and the story of The Ugly Ducklings and all of the musicians he has played with, who share his passion and dedication to music.