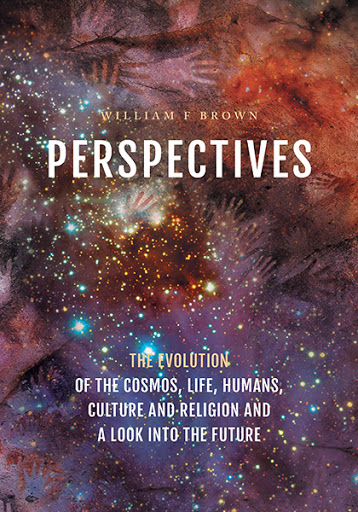 Perspectives
The Evolution of the Cosmos, Life, Humans, Culture and Religion and a Look into the Future
by William F Brown

From the first seconds Following the Big Bang, to our best guesses for the fate of the universe and humanity, science provides stunning new perspectives about the place of humanity in the cosmos. Humans may live on one planet in one small corner of the Milky Way, itself one of billions of other galaxies, but Earth may be unique in one respect. Earth is teaming with life, one species of which, through chance and natural selection, developed an extraordinary brain, gifted with imagination, curiosity and a compulsion to understand ourselves and the universe.

Perspectives is a journey through deep time, from the creation of the universe to the beginnings of life, our human origins and later the rise of culture and religion. It explores what it means to be human, and where our technology could take us in the years and centuries to come.

In 2015 and early 2016, we've discovered an entirely new human species, new powerful gene-editing and gene-drive technologies and most recently, confirmation of Einstein's gravitational waves. This book looks at the cumulation of human resourcefulness, knowledge and creativity that lead to these mind-bending discoveries.

William F. Brown, MD FRCPC is a clinical neurologist and neuroscientist. He graduated from the University of Western Ontario in Medicine, completed his training in Neurology at the University of Toronto before going on to Oxford University for postgraduate training. Much of his research over four decades focused on the peripheral nervous system and how nerve cells in the spinal cord and brainstem control muscles. For this body of work he received the Lifetime Achievement Award from the American Academy of Neuromuscular Disease and Electrodiagnostic Medicine. During his career he worked at the University Hospital in London, Ontario, where he became Professor of Neurology before moving onto The New England Medical Centre in Boston (Tufts University Medical Centre) and most recently McMaster University in Hamilton, Ontario. In his career he published numerous papers and several textbooks in the neuromuscular field. Professor Brown continues to practice medicine and in conjunction with McMaster University leads a public education program on health care in the Niagara Region. He enjoys painting, flying and writing poetry and lives with his wife, Janet, in Niagara-on-the-Lake, Ontario.