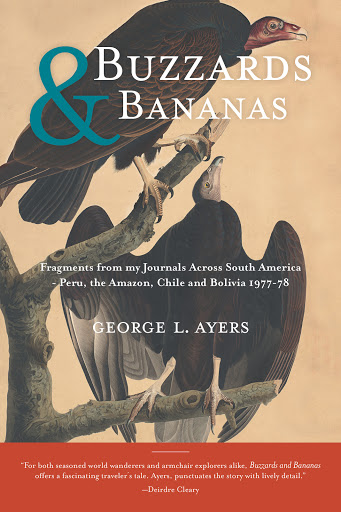 Buzzards and Bananas
Fragments from my Journals Across South America - Peru, the Amazon, Chile and Bolivia 1977-78
by George L. Ayers

Join George and Mary Ayers in the late seventies when South America was a little rougher and a little wilder, for an incredible journey through Peru, the Amazon, Chile, and Bolivia. Fusing together details scoured from their personal journals, photos, and letters home, Buzzards and Bananas captures the essence of everything from the mundane and sometimes humorous moments of day-to-day travel to the emotional strains on relationships; from the excitement of a midnight Federales raid on their Amazon riverboat to the desperation and horrors of military rule. Along the way they spend time with remarkable people: an Argentine couple in love fleeing for their lives; a young man in Santiago whispering about the cruelty of government; a desperate American imprisoned in Bolivia and anthropologist Maria Reiche, the guardian of Peru’s Nazca desert mystery.

Buzzards and Bananas is more than a simple travelogue. George narrates his journey with enduring enthusiasm and heartfelt honesty bringing alive for us the reality of the times and places through which he travelled in a way seldom seen by those who have visited these South American countries.

“Buzzards and Bananas is a witty and engaging narrative, interwoven with informative historical and political anecdotes. Ayers’ personable writing style issues an invitation to a daring time and a frankly personal journey.”

“Riveting—a pure pleasure to read. Ayers’ hard-edged description of the economic and political realities under military repression is unique for an English-written narrative. Buzzards and Bananas is a well-informed contribution to contemporary travel literature.”

George L. Ayers is an author and lifelong adventurer. George was born in Trail, British Columbia, spent his formative years on the Canadian prairies and grew up in small town Ontario. In the sixties the family moved to Australia, sailing around the globe on the great passenger ships of the day. Those early ocean voyages filled him with an indelible sense of exploration and curiosity that never faded. Since then, he has continued to travel extensively, backpacking across Central and South America and hiking the trail systems of Europe, Asia, and North America. In 2012 he published Chasing the Dream, which documents his experiences with Mary as they explored Canada and worked their ways south to Mexico and Central America. Buzzards and Bananas is his second book in an ongoing travelogue series. He currently resides in Brampton, Ontario, where he spends his time hiking and scribbling in his journal. Befittingly, he is an avid member of the South American Explorers club.