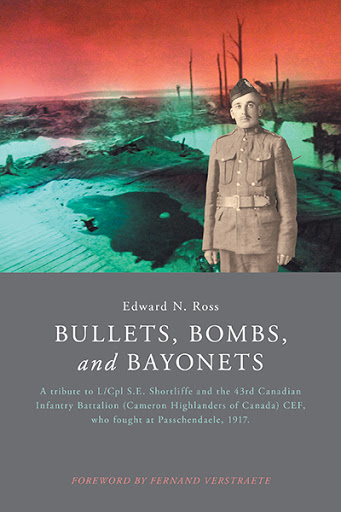 Bullets, Bombs, and Bayonets draws attention to a significant part of Canadian military history, a period in which almost an entire generation of young men never returned from the battlefields of Europe. In 2017 Canada commemorates the 100th year of the Battle of Vimy Ridge. The triumphant conquering of Vimy by the Canadian Corps in April 1917, was considered a defining moment in Canada’s rise to nationhood. Equally significant but much less publicized was the Canadian victory at Passchendaele in the fall of 1917. It was there that more than 4,000 Canadian soldiers died, and almost 12,000 wounded. The Battle of Passchendaele will be forever remembered as a colossal slaughter in the mud of Flanders fields. Bullets, Bombs, and Bayonets acknowledges those members of the 43rd Battalion who fought and died in the Ypres Salient, in the name of freedom.

Readers with an interest in military history in general and WWI specifically will experience an intensive and fascinating education on Canada’s involvement in the Great War during the brutal carnage of the campaign in France and Belgium.

This is an astonishingly well-researched piece delivered in such meticulous detail that the reader is taken step by step through the events of that overwhelmingly brutal war with the military strategies and objectives clearly defined and the outcomes, good and bad, vividly evoked.

Events are ordered and the body of the book is structured to get a strong sense of the forward motion of the war as it unfolds.

The author, Edward N. Ross, former radio broadcaster, real estate company owner, and marketing director lives in Larder Lake, Ontario where he has resided since his retirement in 2009. In the spring of 2010, he began researching and writing about the 43rd Canadian Infantry Battalion (Cameron Highlanders of Canada) CEF, and Lance Corporal Stephen Ernest Shortliffe, a great uncle who fought and died on the Western Front in the First World War. Bullets, Bombs, and Bayonets has taken Edward on a personal journey from his ancestor’s birthplace in Freeport, Nova Scotia to Vimy Ridge in Nord-pas-de-Calais, France, and to West-Vlaaderen, Belgium where the Battle of Passchendaele was fought in 1917.