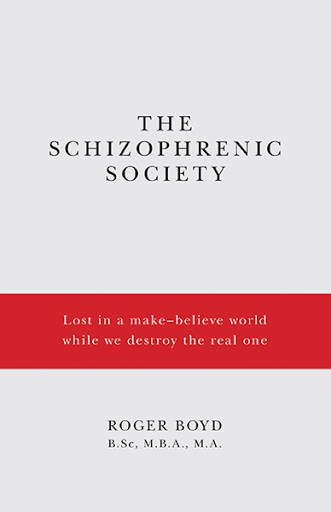 Why does humanity seem unable to step off its unsustainable path, even with so many direct symptoms - from climate change to ecological destruction and peak resources - becoming more and more apparent?

Striving to answer this question, The Schizophrenic Society marshals many different insights from such areas as history, sociology, politics, philosophy, psychology, economics, and anthropology. The resulting story is an important one that exposes both human and societal shortcomings when grappling with the fundamental issue that we’re faced with: the continued growth in humanity’s claims upon Earth’s finite resources.

In plain language, the author takes us on a journey, back to the dawn of agriculture and complex societies, and demonstrates how, over time, humanity has built up a set of delusional beliefs about its ability to control the natural world – of which it is an integral part. He explains how the recent exploitation of fossil fuels has provided a last hurrah for human civilization and its delusional beliefs, and then goes on to challenge the faulty logic of the new religion of Economics, which derides anyone who questions the possibility of infinite growth on a finite planet.

Boyd then takes us into the future, where he shows us what life will look like if humanity maintains its current path, succumbing to modern media’s continuous push for consumption. He warns us that change will not be easy; that the rich and powerful benefit in the short term from the status quo, and that to expect them to readily adopt changes that will reduce their wealth and power for the good of the whole, is naïve.

Roger Boyd has studied the issues of sustainability for over ten years, receiving an M.A. in Global Studies as part of that work. He has extensive experience as an executive in the financial sector and has an M.B.A. in Finance. He has published a book, Energy & The Financial System, describing the links between cheap energy, growth and the modern financial system. He has presented at international conferences on Energy Systems and Climate Change. He writes a blog at humanitystest.com, which provides a multidisciplinary and integrated approach to the challenges created by humanity’s continued exponential growth. Given his focus on the transition to a possible sustainable future and his multidisciplinary approach, he is now taking a third master’s degree in Economics for Transition.