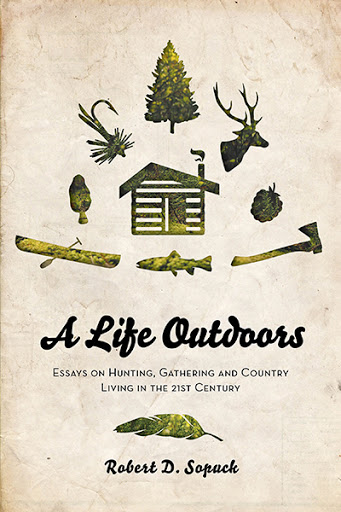 A Life Outdoors
Essays on Hunting, Gathering and Country Living in the 21st Century
by Robert D. Sopuck

The 21st Century is a time of profound and wrenching change. The phrase “stop the world, I want to get off” never seemed more appropriate.

Robert Sopuck caught his first fish at age 4 in the presence of his father. That fish set off a lifetime of exploration of the natural world. He and his bride, the inestimable Caroline, live on 480 acres of wild land south of Manitoba’s Riding Mountain National Park. This book is about their way of life as modern country people who have developed a profound relationship with the land, wildlife, and the ecosystem that supports them. This book describes a way of living with Nature via detailed, funny, informative, and sometimes poignant essays. The first essay, “It All Started with This Fish,” describes the beginning of this journey while the second last, “Hunting with Dad” describes his emotions while speaking at his father’s funeral about their shared outdoor experiences that made him who he is. In between there are hunting stories, “how to” essays on wild food preparation, and descriptions of unique wildlife experiences. “A Life Outdoors” will show the reader that there is a way of life “out there” that is authentic, joyous, and profound.

Robert Sopuck is a fisheries biologist who has spent decades in nature conducting fisheries research, wildlife surveys, and working on the conservation of our precious fish and wildlife resources. He has farmed, trapped, and guided people on many outdoor adventures. He was the Outdoors Columnist with the Winnipeg Free Press and penned over 250 columns on wildlife, country living, hunting, and natural history. Robert is a passionate advocate for the countryside and for those people who live in it. To Robert, the phrase “living off the land” is no mere slogan but a profound description of how he and Caroline live their lives. The message herein is that there are ways of living that touch the Earth lightly while providing deep and profound answers to some of our most vexing questions.

Robert Sopuck is also a Member of Parliament in the House of Commons.