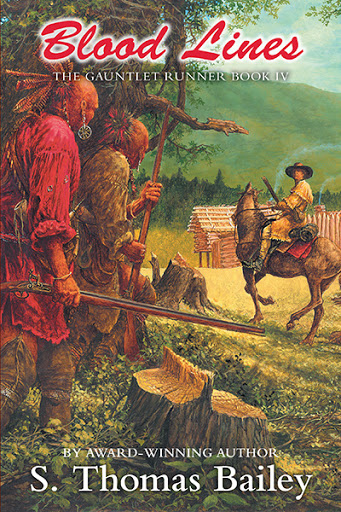 It is late autumn 1756, Jacob Murray and a band of rangers are locked in desperate pursuit of a Delaware raiding party that overran and massacred the garrison at Fort Stevens. Among the women and children taken prisoner is Jacob’s wife, Maggie. Driven by guilt and anger, Jacob sets a furious pace that leads his men into dangerous unknown territory.

Meanwhile the fate of the prisoners is made all the more tenuous when raiding party scouts report the death of Chief Tewea at Kittanning, and Maggie will soon be forced to reconsider everything she has ever thought about the ‘savages’ that have inflicted such havoc on her life.

In a world at war where blood debts are constantly paid and incurred, decisions made can change the course of lives forever. For Maggie, Jacob and their son James, the pull of their blood will draw them into a winter none of them could foresee.

The fourth book in the award-winning Gauntlet Runner series, Blood Lines once again transports readers to colonial America during the French and Indian War and offers a clear unsentimental glimpse into the history of the period through the eyes of its characters.

“Mr. Bailey does a remarkable job of capturing this important time in history…a page-turner that you won’t want to put down.”

Muzzleloader ‘For the Bookshelf’ Review, May/June

S. Thomas Bailey is an Award Winning author and independent researcher of early North American life. He is a raw historian at heart, and a writer by choice. Bailey’s own sense of history is enriched by a Mi’kmaq grandfather and a family tree that can be traced back to the young surveyor James Cook, who began his career mapping out the St. Lawrence River system during the French and Indian War. He resides in a quiet hamlet north of Toronto, Ontario, with his wonderfully supportive wife and two amazing children. His family spends their spring and summer seasons each year visiting French and Indian War sites, attending re enactments and living history events, and spreading the word about this wonderful period in North American history. Bailey looks forward to continuing Jacob and Maggie’s story. Watch for additional novels in The Gauntlet Runner series, coming soon. S. Thomas Bailey is always available for signings, speaking engagements or to just talk about his book series. Follow, contact or connect with S. Thomas Bailey for updates, scheduled book signings and events.