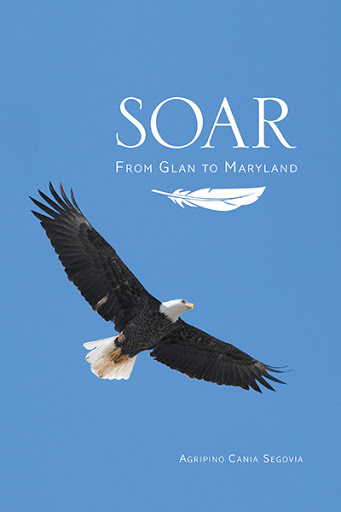 Soar
From Glan to Maryland
by Agripino Cania Segovia

This book is an inspiring life story of a poor farm boy whose extreme poverty was not an obstacle to soar high and achieve his dreams, but served as a challenge to rise above it. His unwavering focus, hard work, tenacity, and great faith in God, got him through the lowest ebbs in his pursuit for education and success. Narrated in the book are heart-tugging glimpses of the travails he and his family went through to merely exist, having lived at one time in pig pen quarters. He worked his way through school and took on the humblest of jobs. Education to him was the ultimate key to golden opportunities. Unrelentingly, he pursued to attain the highest level of education. He attributes what he has achieved to abundant blessings bestowed on him by the good Lord. The author sums up his life as a "blending of the unvarnished realities of living and the polished consequences of education."

Agripino Cania Segovia was born to a life of utter deprivation in Glan, Cotabato, Philippines. Raised as a destitute lad who lived a nomadic life for several years, he nurtured big dreams of shaking off the dust of abject poverty by being educated.

He was unflagging in his quest for education. In the post-war period, he enrolled as a first-year high school student at the age of twenty-one. At one point in high school life, Agripino walked sixteen kilometers a day to attend school. Somehow, his scholastic brilliance, sterling leadership, and congenial personality camouflaged the dire straits of poverty he was in.

Albeit the grief he was going through with the death of his wife, Agripino successfully defended his doctoral dissertation at the University of Iowa in 1973.

Dr. Segovia assumed different positions in the Seventh-day Adventist institutions in the Philippines, Singapore, and in the Church’s world headquarters in Maryland, USA. He started as a district leader and rose through the ranks.

He holds the distinction of being the first Asian denominational worker elected in an administrative position as executive secretary of the Far Eastern Division based in Singapore, and the first Filipino to have occupied an administrative position as the associate director of education of the General Conference of Seventh-day Adventists in Maryland. He served in this capacity for thirteen years until he retired in June 1995 during the General Conference Session in Utrecht, Netherlands.