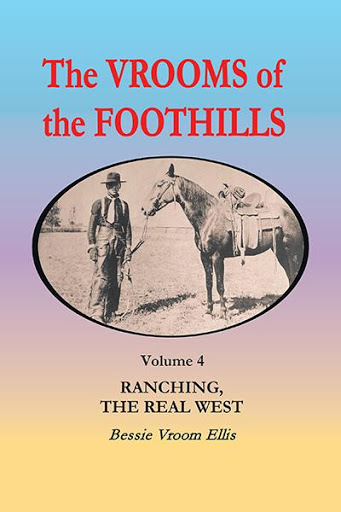 The Vrooms of the Foothills, Volume 4: Ranching, the Real West
by Bessie Vroom Ellis

Ranching, the Real West is Volume 4 in the series THE VROOMS OF THE FOOTHILLS. Once again and using 5 maps and over 280 photos, Bessie Vroom Ellis vividly illustrates the social history of southwestern Alberta. The captions are memory-filled vignettes highlighting the gritty determination of ranching families and cowboys to tame a new land.

The photos recall ranch work, play and perils, stories of the boys who went to War and the fun of a country Christmas. They are from settlers in the communities of Beaver Mines, Pincher Creek, Fort Macleod, Twin Butte, Mountain View, Caldwell and Waterton Park.

While teaching at Waterton Park School, she met and married a local resident and raised a family there. Known then as Bessie Annand, the author wrote feature articles and the column Wonderful Waterton for The Lethbridge Herald; she also sent news items and articles to other newspapers and to radio and television stations.

Waterton Park, author was active in the Girl Guide movement and in the Anglican Church. Regina, she was active in politics and in various organizations. In 1992, Ms. Ellis was awarded the Commemorative Medal for the 125th Anniversary of the Confederation of Canada, 1867-1992.