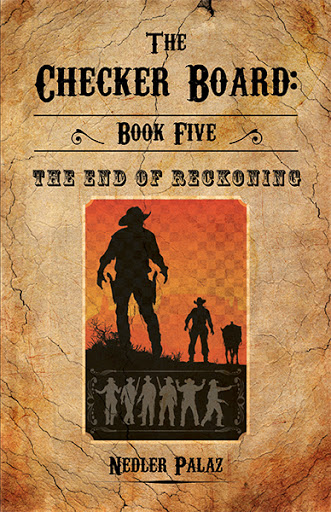 The Checker Board: Book Five: The End of Reckoning
by Nedler Palaz

In 1885 Dave Smith undertakes to track criminal Cassius Harding to Kansas. The man now operates as Josh Hardton, successfully amassing thousands of acres through a cunningly engineered river bed diversion and a bribed resurvey. Landowners are angry at losing valuable land through clever manipulation and outright fraud, and a shooting war threatens.

Dave resolves to work smarter than his previous encounter with Hardton. Dave has several run-ins with Lucy Allen, Hardton’s fiancée. Her perturbed reaction is to use a gun against Dave’s reprehensible behavior. Her vow is to kill him the next time.

With proof developed against Hardton, Dave waits to build legal action, but Hardton retaliates with night raiders against the very landowners who protested. The raiders wound Dave, forcing him to seek aid.

Lucy Allen suddenly controls the situation. The real threat is that she will turn him over to Hardton’s gang. Dave must save both their lives and he initiates altering the Allen woman’s outlook, telling her all of the things she hates to hear. Confronted with Hardton, she delivers the lie that sends away the menacing gang.

Dave successfully averts a stage holdup by Hardton’s gang to silence a government investigator. During the melee, Dave captures Hardton.

Over struggles to plan a new life, Dave learns his deceased father has engineered one last humiliation. Disinclined to accept revenge from the grave, Dave cuts off the beginning of a warm relationship with Lucy Allen, and disappears, heading back to his old fugitive existence.

As once sworn enemies the two collide, hurling words of recrimination, only to reach the end of reckoning in a surprising conclusion.

NEDLER PALAZ IS A PEN-NAME chosen by the author to reflect the western background of the fiction series titled “The Checker Board” books. The author, Nellie Pallagi, has a lifetime interest in the western genre. The books include good character development, plenty of action, and a story plot designed to bring back interest in Western lore and storytelling. Set in the 1880’s, the stories relate to Dave Smith’ efforts to carve out a life with skills that include a fast gun, a race horse, and a Cheyenne partner.

Follow the adventures of Dave Smith and Sam Eagle Feather Larson from West Texas through New Mexico territory, north into Wyoming, and on to further western exploits.