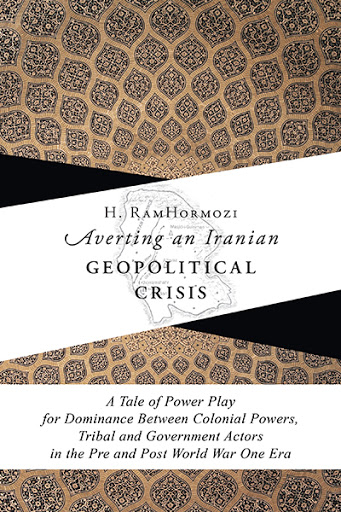 Averting An Iranian Geopolitical Crisis
A Tale of Power Play for Dominance Between Colonial Powers, Tribal and Government Actors in the Pre and Post World War One Era
by H. RamHormozi

Caught between the Ottoman Empire to the west, the Russian sphere of influence in the north, and the British colonial territories in India and the Middle East, Iran at the end of the nineteenth century was a hotly contested strategic battleground. The ruling Qajar Dynasty was led by a young and inexperienced king, and the British were busy extending their reach through unbalanced treaties and resource concessions. Meanwhile, powerful tribal leaders like Sheikh Khaz’al sought to retain their traditional positions and block efforts to unite the country under a strong central government.

With the discovery of oil and Britain’s need to fuel her war machine in World War I, increased attention on Iran demanded a modernization of her policies and government. Reza Khan, an otherwise unknown soldier, united the armed forces and swept to power, bringing with him the unity and structure needed to take Iran into the emerging modern world. After disposing of the former rulers, he became the new shah, and fought to rebuild his country after centuries of abuse and manipulation by foreign powers.

What was at stake was the autonomy of Iran’s lifeline, Iran’s “Golden State”, Khuzestan province, a province with abundant, rich oil and gas reservoirs, natural resources with a strategic importance to the warm waters of the Persian Gulf. The full sovereignty (by others) could have exponentially undermined Iran’s position and role on the world stage, both politically and economically, and, even more so, in the turbulent Middle East of today. Events of the time period of this book are very pertinent to the current geopolitical conversation, struggles and developments in the region.

This is the story of the dynamic power play for dominance, robust diplomacy, and political rivalries between colonial powers, powerful tribes, and government actors in the Iranian southwest theater. The emergence of a powerful regime in Iran and the superpowers’ radical shifts in foreign policy and in the regional engagements in the post World War I, significantly contributed to averting this geopolitical crisis of a historic proportion.

It is an extensively researched and definitive history of Iran at the turn of the twentieth century that is required reading for anyone seeking to understand the history of colonialism, oil exploration, and the ongoing political tensions of the Middle East.

The Author is a veteran of more than thirty-five years working for a major corporation in the United States and for internationally known oil companies in Iran. He has completed contracts around the world, including the Middle East, Far East, and Mexico. After completing his first career, he turned to writing as a way to explore his passion and extensive knowledge of the history and politics of Iran and the rest of the Middle East. He is currently working on the next book, which covers Iran’s role and struggles in the World War II era.