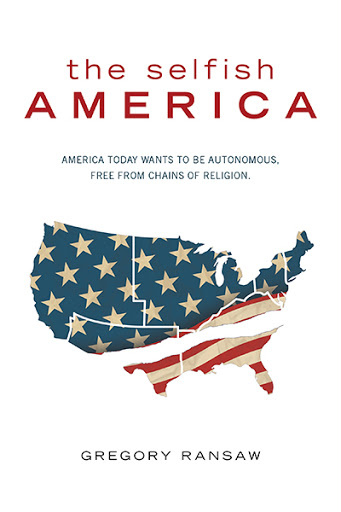 The Selfish America
by Gregory Ransaw

America today is a shadow of what it once was. Over the past forty years, people have turned away from God and instead accepted the flawed view that morality is subjective and personal. As a country, we have discarded the idea that there is an absolute right and an absolute wrong. This is spread through our universities, where students learn only the scientific perspective without completing their education in religion and morality. This has created untold social problems, from the 2008 market crash to the widespread abuse of drugs and alcohol.

AMERICA TODAY WANTS TO BE AUTONOMOUS, FREE FROM CHAINS OF RELIGION.

Having experienced periods of crime and the use of drugs and alcohol, Gregory Ransaw was saved by Christ and saw what his life had become. Since then, he has devoted himself to studying the Bible, working with his church, and researching morality. He has a passion for education and studying the transcendent reality of our existence through God.

He has been writing essays about the Bible for many years, and this is his first published book. He has lived and travelled in Europe and across the southern American states. He currently lives in Alexander City, Alabama, where he enjoys teaching the Bible and watching old movies.