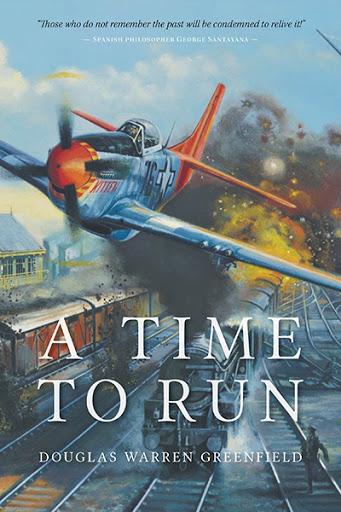 A Time to Run
by Douglas Warren Greenfield

Set within documented historical events of WW II and modern Afghanistan’s war-torn battlefields, you will be caught up in one man’s dream to redefine history. Retired Veteran, Lieutenant Albert Connor, is daily tormented by global news reminding him of the devastation of war and loss of his lovely fiancé. These events he would change in a heartbeat if only he could transcend the bonds of time.

Revisiting his childhood farm on the Canadian prairies while undergoing dream therapy treatment, Connor escapes doctors’ care, embarking upon a perilous journey beyond enemy lines, finishing in a face-off with Hitler himself.

Can history be altered or the fires of love be quenched forever? Is Santayana’s warning relevant today?

Only those who can see the invisible can do the impossible!

“Those who do not remember the past will be condemned to relive it!”

Douglas Warren Greenfield, a consummate storyteller, joined the Royal Canadian Navy at age 18 and for ten years explored the Pacific Rim. Then, for 25 adventurous years he served with British Columbia and Alberta Provincial Parks. Upon retirement, he began writing self published booklets, newspaper articles and e-booklets along with his autobiography, “Child of the Land.” Mr. Greenfield resides in the beautiful Peace River Country of Alberta.