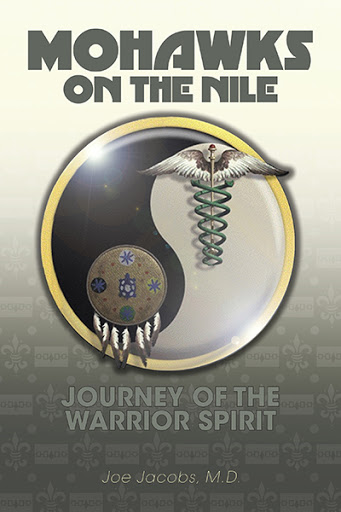 Mohawks on the Nile
Journey of the Warrior Spirit
by Joe Jacobs, M.D.

The inclusion of Mohawks and the Nile River in the same sentence seems a bit incongruous. American Indians in general and Mohawks in particular have remained relatively anonymous throughout contemporary American society. Joe Jacobs, whose mother was a member of the Kahnawake band of Mohawks near Montreal, Canada, gives insight into one of the most influential American Indian tribes in the histories of Great Britain, France and the United States. He brings to life the Mohawk people of his ancestry by drawing a parallel between the history of the Kahnawake Mohawk people on the banks of the St. Lawrence River and his own contemporary reflections and professional journey. That history is filled with the notion of balance between what it means to be a Mohawk in a culturally alien white Canadian and American society. Just as the Kahnawake Mohawk high steel workers balance themselves on the steel beams of the New York City skyscrapers that make it the iconic city it has become, this is a story of one Mohawk who traversed the divide between being Mohawk and White.

Joe Jacobs is a “child of the 50s”, a “baby boomer” and a member of the Kahnawake Mohawk tribe in Canada and the Akwesasne Mohawk tribe in upstate New York. The youngest of four children and the first of his family to graduate high school, Joe was able to obtain his Bachelor of Science degree from Columbia University and his medical degree from Yale University. He has enjoyed all of the rights and privileges of those academic distinctions. But for Joe, they came at a price of almost losing his Mohawk Indian identity.

He rediscovered his Mohawk “inner voice” in the stacks in the Yale Sterling Library. His life was transformed by the history of his Kahnawake Mohawk tribe from the woodlands of North America to the banks of the Nile River. As a result of this rediscovery, he has developed a stronger bond to his family and his Kahnawake brethren. He has come to recognize the reincarnation of the warrior spirit.