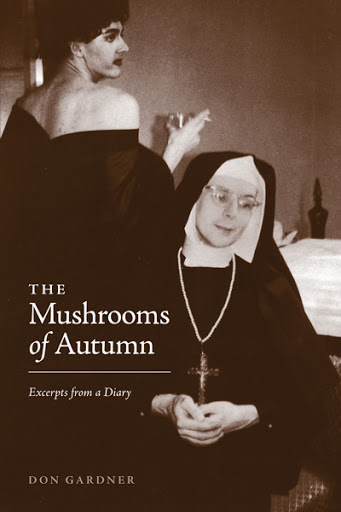 The Mushrooms of Autumn
by Don Gardner

Not since Margaret Mitchell’s Scarlett O’Hara has there been a more talked about literary character than Glory Anne Grimes. When she was good, she was very very good. When she was bad, she was sleaze.

The saga begins when our heroine is ten years old and naïve. Forty-three years later, Glory Anne Grimes is still naïve and proved to be a slow learner. Angel Peters and Michele Dionne, being at opposite ends of the spiritual and moral spectrum, have a polarizing effect on Glory Anne. She considers herself somewhere between them, and throughout these years is pulled from one extreme to the other searching for a deeper relationship with God, while yielding to lust amid her Catholic fidelity instilled in childhood.

Mushrooms of Autumn is one person’s journey in search of happiness only to realize it was there all along. The years recall the closeted shame, guilt, and frustration that come with growing up in the 50’s and 60’s and leads into the redemptive years of the 80’s. Two themes run throughout the novel: (1) in spite of seemingly insignificant events of childhood that influence us toward success or failure, we are a product of our life’s experiences; and (2) God will wait for as long as it takes to get our lives together.

The Mushrooms of Autumn could be anyone’s story because it’s about values: the rise, the fall and the journey back, while embracing a shadow-side often cloaked in mystery even to one’s self. A MUST READ for anyone who remembers coming of age whether at fourteen or forty-two.

Don Gardner is a Registered Nurse. He holds a master’s degree in Health Care Administration. This is his second novel.