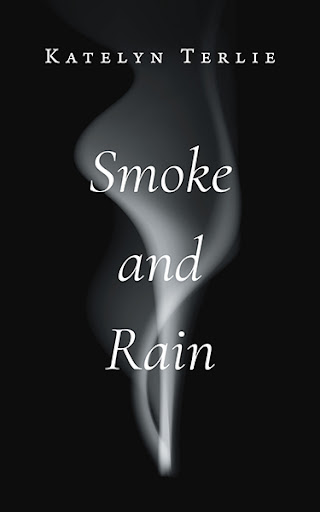 Smoke and Rain
by Katelyn Terlie

Sixteen-year-old Bree wants to get out. Her family has moved, yet again, to a new town, but their problems have followed them to Kitimat. In an attempt to escape her manipulative and volatile father, Bree turns to pot and alcohol, but her stash is running low, and she needs to find a new supplier. The first step to finding one is to make some new friends.

But this isn’t Bree’s only problem. An elderly man keeps harassing her, telling her how terrible her father is. She already knows this, but how does this old man know? They’ve only just moved here. Is it possible her father has been here before?

Attempting to navigate her complex family dynamics and the drama that comes with being a teenager, Bree strives to find a sense of calm and normalcy with her boyfriend and two new friends, but that all disappears when she discovers an empty grave in the woods.

Katelyn is a hairdresser who grew up in various small towns, each with its own secrets that the locals were trying to hide. She has been an avid journaling enthusiast since she was a young girl and has a strong passion for anything that allows her to be creative.