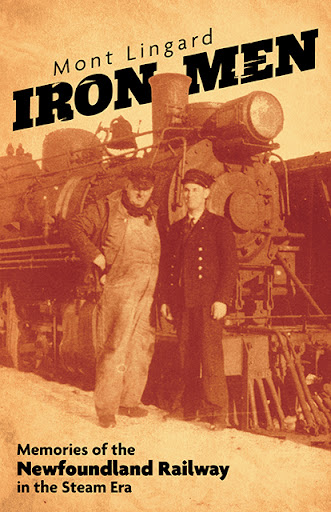 Eminent Newfoundland Railway historian Mont Lingard paints vivid pictures of the “Iron Men”—tough and dedicated railroaders and their trains that opened up Newfoundland’s territory and economy, and serviced its interior and outport communities, beginning in the nineteenth century and lasting throughout most of the twentieth.

An institution for half a century before Newfoundland became a Canadian province, the Railway began in 1898 to enable the development of the island’s mining and forestry resources, long before the construction of highways or even gravel roads. Its 547-mile mainline—the longest narrow-gauge railway system in North America—linked up the island’s branch lines and its communities from east to west for 107 years and made possible the construction and staffing of North American army, air force, and naval bases during WWII.

With locomotives powered first by steam and then by diesel, the Iron Men worked to the limit on long tours of duty. Away from home for weeks or even months, they pressed into service the Railway’s freight, passenger, and snowplow trains through rugged and more gentle terrain, all year long, even in the gruelling months of the fiercest winters.

Iron Men presents the legacy of the Railway in the words and images of those who were involved. A collection of original interviews and portraits of railwaymen, along with historical photographs from their own collections, makes Iron Men a rich source of fascination for railway buffs and regional history enthusiasts.

Mont Lingard is the leading historian on the historic Newfoundland Railway, on which his five previous books have sold over 20,000 copies.

Born in Bishop’s Falls in 1930, Lingard grew up near railway operations. The Newfoundland Railway was practically in his front yard, and the Botwood Railway ran just behind his family’s home. He started school in a one-room school in Antle’s Lane and graduated from a six-room school near Canning’s Lane in 1948, the only student in his class.

Lingard was hired on with the Railway as a callboy-student fireman in the summer of 1948. A year later he started work as a locomotive fireman on the coal-burning locomotives, and in 1951 he moved on to the roundhouse office where he worked until the summer of 1968 when he resigned and started work as business manager with the Grand Falls Amalgamated School Board and then the Exploits Valley Integrated School Board. Consequently, Lingard had two sequential two-decade-long careers—first with the Railway and then in education—before finally retiring in 1989.

Lingard loved the Railway and was fascinated by the rugged and secluded Gaff Topsail area, rising above the island’s central plateau with its immense snowdrifts. Starting his tireless research in 1996—he has more photos and recorded interviews with former Newfoundland railroaders than anyone else—Lingard wrote his series on the Railway, one for each of the four subdivisions. His last book, published in 2000, was about the “Newfie Bullet”, a cross-island passenger train that operated until 1969.