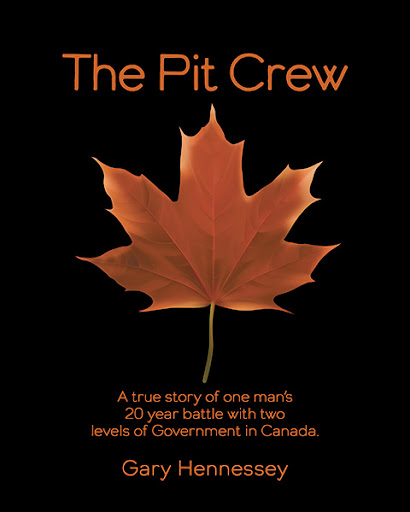 Many people dream of one day opening their own business and being their own boss. The independence, meaningful work, investment in yourself instead of another corporation hungry for money and profiting off your labour—all reasons you might pursue an entrepreneurial path. For Gary Hennessy, a small business owner on the East Coast of Canada providing administrative services to clients, a contract with the provincial and federal governments should’ve been a means to security, stability, and success. So how did he find himself unemployed, hundreds of thousands of dollars in debt, and awaiting trial with the potential jailtime?

The Pit Crew chronicles a two-decade-long battle with the Canadian government. Full of supporting documents ranging from sworn testimonies, affidavits, government email correspondence, and more, Hennessey lays out his argument regarding the ways the governments and their agencies disregarded their own laws, policies, and regulations at the cost of their own citizens. For readers interested in politics, law, and history, The Pit Crew highlights contemporary issues and raises important ethical questions. This is more than one man’s plight against “the system;” this is a warning about unmitigated power and control.

This is the view from our back steps where I spent the first twenty-four years of my life, in a community called Goulds, twenty minutes from downtown St. John’s.

At age 18 I started working at a hospital in St. John’s, attending college and university programs in the evenings.

Four years later, I left my job to attend college full time, studying business and accounting. At age 27, I started a business providing payroll services for home-care clients in and around the St. John’s area.

This business lasted for 19 years until 2007, at which time I was dealing with in excess of 500 clients, 986 staff, and a requirement of approximately $25,000.00 per day in funding in order to meet payroll demands.

This book describes my experience in this business and the many years that followed battling two levels of government in Canada.

During this period, another St. John’s man with the same name as me also received significant media coverage regarding his dealings with the legal system. In a small city like St. John’s, an issue like this is unusual and polarizing for both parties.

I can only say that I hope the legal system treated him fairly and acted with integrity.