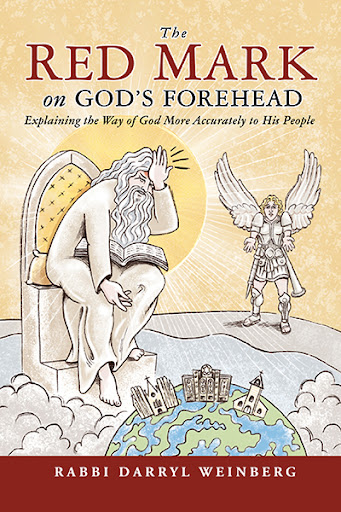 A book that will shake the modern-day church to its core, The Red Mark on God’s Forehead trumpets the call to Christians to return to the true roots of their faith—the worship of God as He commands in the Torah. In an engaging and thought-provoking manner, Darryl Weinberg outlines the path Christianity has taken, lured by pagan practices, away from God’s plan for His people and toward the crisis facing us in these end times. The ultimate end of this journey is the denial of Messiah Himself.

From moving the Sabbath from Saturday to Sunday, to its troubling involvement in festivals such as Easter, Christmas, Valentine’s Day, and Halloween, the Church has grieved the heart of God, splintered its own unity, and engaged in a lifestyle abhorrent to the Lord. Most shocking, however, is the thorough exploration of the outright anti-Semitic sentiment, particularly as expressed in the Church Fathers, that led us to this point.

Through this troubling message, however, shines a light of great hope. Our ever-merciful, loving God desires to draw us back to the true worship and lifestyle that brings us into fellowship with Him. He is anxious to forgive and redeem, and His Word contains all that is needed to serve and worship Him in spirit and in truth.

Darryl Weinberg holds a Bachelor of Business Administration from Ryerson University in Toronto and has spent over thirty years in sales and marketing, leadership, and Human Resources. In 1998, he entered Messianic ministry, and in 2012 he founded and became the director of A Light to the Nations Messianic Ministries. He has also served as rabbi for Messianic synagogues in Toronto, Peterborough, and Niagara Falls in Ontario, Canada, as well as in Los Angeles, California. His ministry has led to speaking engagements throughout the United States and Canada.

A voracious reader, he can boast of over one thousand books in his personal library. His extensive research and passion for his topic shine brightly throughout the pages of The Red Mark on God’s Forehead. He speaks on the subject publicly and lives out the teachings of the Torah with his family.

Rabbi Weinberg lives in Niagara Falls, Ontario, with his wife of fourteen years, Milena, their twelve-year-old son, Yossi, and their three cats.