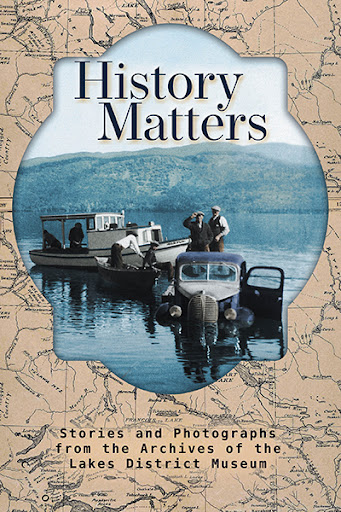 Located in the geographic centre of British Columbia, the Lakes District is a unique region with a fascinating backstory. History Matters, the first book published by the Lakes District Museum Society in a half century, gives readers a glimpse into the lives of some of the heroes, villains, misfits, and everyday people who have in the past called this region home.

In 2018, the Lakes District Museum Society began posting short stories and photographs about Burns Lake and surrounding communities on its social media page. This book is a compilation those posts, along with new material and never-before-seen photographs gleaned from the society’s archives. Want to know how an employee of the Yukon Telegraph spent his time? What was a tie-hacker’s life like? How did an unknown skier from Burns Lake make it to the 1932 Olympic Winter Games, and a man many feel was the real-life James Bond come to live in Colleymount? History Matters answers these and other important questions.

In addition to touching and sometimes humorous tales of life in the Lakes District, readers of this book will encounter thrilling stories of murder, adventure, international intrigue, and even the supernatural. This collection is a valuable contribution to the community’s history, and one that will fascinate anyone interested in the area, its past, or the European colonization of Western Canada.

Michael Riis-Christianson came to the Lakes District with his family in 1972. An award-winning journalist whose work has appeared in numerous newspapers and magazines, he now works as curator of the Lakes District Museum. When he isn’t combing the society’s archives for new stories, he spends his time writing, taking photographs, playing hockey, and exploring the Lakes District—particularly its old, abandoned buildings and settlements. He lives in Burns Lake with his wife, Sashka, and dog, Roxi. This is his first book.

Like Riis-Christianson, the other contributors to History Matters—Myers Illes, Teaira Bishop, and Summer Robinson—share a passion for local history and a connection to the museum. Pat Turkki, whose writing also appears in this book, was the author of Burns Lake & District: A History and a three-time winner of the MacMillan Bloedel Award for Excellence in Community Journalism.

Interested in getting in touch? Readers can connect with Riis-Christianson and the other contributors via the Lakes District Museum’s Facebook page at https://www.facebook.com/LocalHistoryMatters.