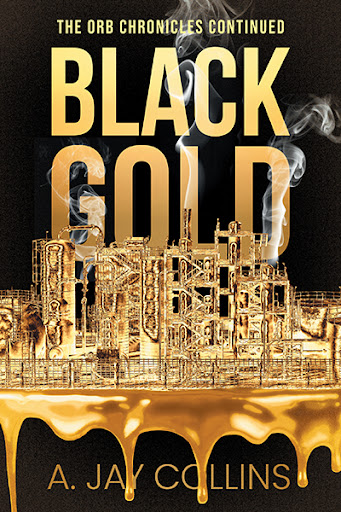 Black Gold
by A. Jay Collins

In the years following the end of the Shah’s dynasty, a major petrochemical refinery is being constructed in northern Iran by the Islamic Regime. While this is good for Iran, it’s not so good for the West. Enter the Organization for Reorganizing Business (ORB), led by Murray Stockman.

ORB sends their senior field operative, Matthew Black, into Iran to “fix” the refinery problem. But this won’t be an easy task. Black needs to refocus the Regime on being pro-West, a tall order that’s going to require all his skills and the support of many.

During significant political unrest and social upheaval, Black and the other ORB operatives on the ground, use every element at their disposal to upset the Regime’s plans. Amid the rise of the Iranian working men’s union movement and the birth of the Friends of Iran youth organization, ORB works to sabotage the refinery, cut the Regime’s access to funds, and bring about the failure of the Revolutionary Guard.

Can Stockman and his people cut Iran’s ties to Russia and China and wrest control of the Iranian oil industry from the Regime before it’s too late?

A. Jay Collins has been involved in the engineering and construction of industrial developments the world over, been director of several mining companies, and has extensive field experience in the petrochemical industry. He spent two years living and working on Iran’s north coast during the revolution.

His work focuses on wrapping fiction around reality, using his personal experience as a jumping-off point. His tales of adventure and possibility, loosely based on gold, include The Golden Handcuffs (2004; 2021) and Nazi Gold – Latitude 55 (2021). Collins lives in the Vancouver, BC, area with his wife, Judy.