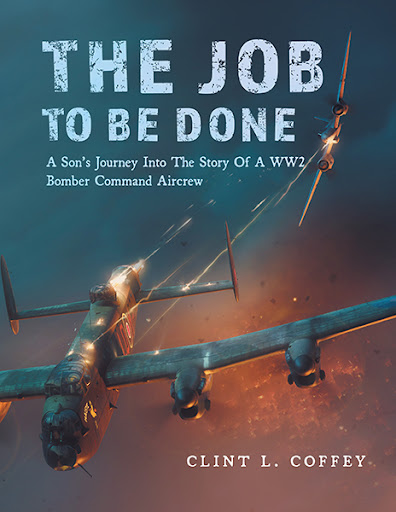 The Job To Be Done
A Son's Journey Into The Story Of A WW2 Bomber Command Aircrew
by Clint L. Coffey

A unique blend of historical narrative and personal memoir, this is the powerful true story of seven young men, including the author’s father, who served in Bomber Command in World War Two.

Based on a pilot’s logbook and years of research, this beautifully crafted historical exploration follows the young airmen through training and then vividly relates their experiences in almost sixty combat operations against targets in Germany and France. The story of their lives after returning home, including the burdens they carried with them, is told with empathy and compassion.

Clint Coffey recently retired as a Correctional Supervisor after 23 years working in a Canadian prison. He has a passionate, lifelong interest in history- reading his father’s pilot’s logbook, he realized there was a story there that needed to be told. He spent six years successfully tracking down the families of his father’s Bomber Command crewmates, all of whom contributed to the book. He shone a light on family secrets and hidden burdens, interviewed the last surviving member of the crew, and unexpectedly forged a new and profound level of respect for his Dad.

Clint lives in Maple Ridge, B.C., with his wife Tasnim and their two cats, Mavis and Clara. Retirement has allowed him to spend more time with family, and to indulge his passions of reading, cycling and drinking craft beer.