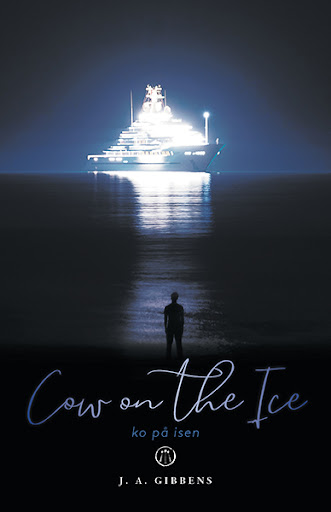 Cow on the Ice
by J. A. Gibbens

An international whirlwind, Cow on the Ice—a Swedish idiom that warns of danger—begins in its country of origin, as Astrid Carlsson, founder and CEO of Nanovo Group, a pharmaceutical research company currently looking into a cure for Alzheimer’s disease and dementia, is on the verge of falling victim to the disease herself, as well as to her cheating husband, Matthew Gilbert Espie.

Matthew and his Parisian girlfriend are staying at his friend Kent’s estate in Canada—while Kent and his wife, Lucy, travel abroad for a year—and find themselves in the wrong place at a dangerously wrong time. Kent and Lucy have their own struggles, though in a much more luxurious locale, staying with Kent’s long-time friend, billionaire Mark Witherspoon, on his mega yacht, cruising the Mediterranean, and dealing with ghosts from their own pasts.

Book 2 of The Awen Chronicles, Cow on the Ice: ko på isen, builds on the drama and intrigue of its predecessor, L'Orté Point, and is full of love and loss, violence and beauty, intrigue, and world travels described so vividly you’ll feel like you’re right there. Its danger speaks to the adventurer in us all, its beauty to the romantic, and its suspense to that frightened part of us that knows just how fragile life can be, no matter how well or how poorly it is lived.

Author, artist, and DIY enthusiast, J. A. Gibbens holds degrees in science and education from the University of Waterloo and Queen’s University. After twelve years of teaching at the secondary school level, and more as a business owner, J. A. Gibbens began her writing career with her debut novel, L’Orté Pointe— The Awen Chronicles–Book 1, released in 2022.