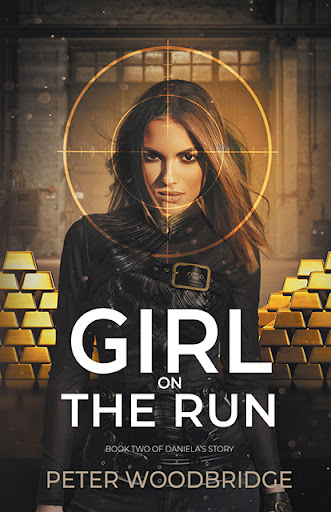 Using her cover as a police officer, Daniela has stolen the secret stash. Now she’s a fugitive—branded as a jihadi extremist, an al-Qaeda terrorist. In Barcelona, a massive police dragnet covers the city. A sniper takes aim: his orders—shoot to kill.

With a stolen identity, Daniela avoids arrest but must deliver the money—and a watertight cover story. It’s not easy. Her own people are convinced she’s a double agent. In Syria, she’s reunited with Jamal, her al-Qaeda lover. Russia’s elite Spetsnaz shelter them from the government’s feared Mukhabarat security forces.

Girl on the Run is the second book in the Daniela’s Story trilogy. She’s working deep undercover, using all her skills and guile to reach the man she’s determined to meet. Lies and deception abound and Daniela is in the middle of it. What is her agenda? Whose side is she really on?

An agricultural economist, Peter Woodbridge spent much of his business career travelling and working globally—often visiting places steeped in history and intrigue. He brings to the world of fiction his passion for in-depth research and a knack for storytelling. Readers will enjoy the memorable characters and fascinating plots he creates for his crime and mystery novels. He lives in Vancouver, Canada.