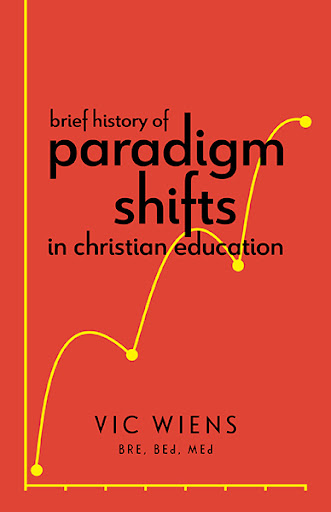 We are currently in the transition from the Modern paradigm to a yet to be named postmodern paradigm. This very day will be a significant time in history. How will our generation pass on our faith to the next generation in a manner that is consistent with the ongoing story of God’s people?

Wiens’ book seeks to inform this process by reviewing how God’s people have adapted to culture shifts since the time of Abraham through Egyptian times to the Babylonian exile, to the time of Alexander the Great to the Roman Empire. The Scholastic, Renaissance, Reformation and Modern paradigms followed in quick succession, influencing thought, industry, education, and religion.

This book seeks to impart an understanding of the continuing mandate, of the current level of cultural change, and of the best practices for passing on our faith through historical cultural changes. The author’s key findings in this study have been the significant role of the family patriarch in every cultural paradigm and the enduring effective triad of family, church, and Christian school, in its various iterations, for passing on the faith to the next generation for more than 2000 years.

Who should read this book? All Christians who are involved in, or making decisions about, any one of the many forms of home-based, church-based, and school-based Christian education.

Wiens has a wife, two adult children, and three grandchildren. He lives in the Calgary, Alberta exurb of Airdrie, in Canada.