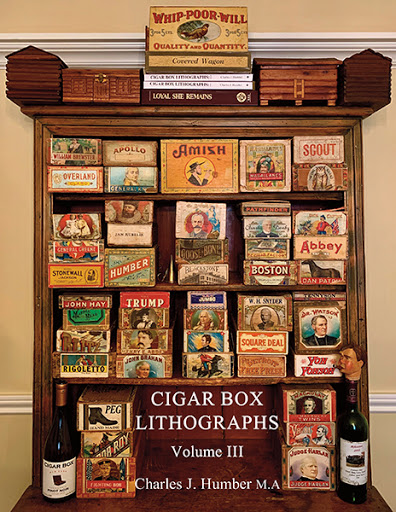 Collecting 100-year-old lithographs attached to the inside lids of wooden cigar boxes is a gratifying hobby. This Jack Minor cigar box imitates a log house, not the typical venue for cigar makers who made plane wooden boxes for their cigar brands. Since the log house box is labelled Jack Miner, one presumes it was made in Canada because Jack Miner, from southwestern Ontario, was world-renowned as a Canadian conservationist banding thousands of migratory geese during his life. Acquired after Volume III of this four-volume series had gone to the printer, this rare cigar box is now displayed on the back cover of Volume III. Made, 1925, by B. R. Hahn, a member of the Isaak Walton League, Bay City, Michigan, this cigar maker wished to salute this Canadian with a custom-made cigar box. There are some 200 Isaak Walton League (see Volume II, page 81) Chapters across the U.S.A.

Charles J. Humber of Mississauga, Ontario, was born in Montreal, has resided in Toronto, grew up in Boston, graduated from Temple University, Philadelphia, and has lived in Madison, where he earned his M.A., University of Wisconsin. He also studied at the University of Toronto, under Northrop Frye, one of the 20th century’s most influential academics. While attending University of Alaska, Fairbanks, 1960-1961, he met Californian, Gayle Jenkins. Following their marriage, 1961, they raised four children: Kristy, Karyn and twins Charlie & Scott. Following his career as a high school in the Toronto area, Humber entered the publishing world, 1982. LOYAL SHE REMAINS, the first volume Mr. Humber published with his partners, became a national best seller. It was presented, in 1984, as the official gift to both Her Majesty The Queen as well as Pope John Paul when both visited Ontario for the province’s 1984 Bicentennial. Publisher of Heirloom Publishing, 1985-2003, Humber oversaw the production of the CANADA Heirloom Series, a cycle of seven books, promoted as “cultural ambassadors” when government officials went on international trade missions to promote Canada abroad. Upon retirement, Mr. Humber continued to explore his antique interests, focussing on the intriguing lithographs on the inside lids of tens of thousands of cigar boxes made between 1885-1920. His endeavor has given due recognition to some five hundred illustrations from cigar boxes of that period and has gratified many followers as they rediscover the rich culture hidden inside these cigar boxes more than one century ago. This Volume III, plus Volumes I and II, in addition to the forthcoming Volume IV, all notably capture the contributions of our indigenous peoples, various writers, stage performers, war generals plus discoverers, industrial giants, inventors and much more. Similar to museum portrait galleries, but accompanied by vignettes, the volumes of this series afford one the prospect of peering into the past and re-capturing the history all of us missed growing up.