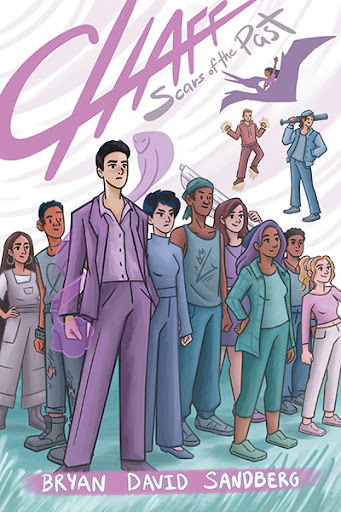 Chaff
Scars of the Past
by Bryan David Sandberg

Rich, handsome, and deeply enamoured with his track-star boyfriend Sean, eighteen-year-old Alex Chang-Williams has everything. That is, until he is abducted by an alien empire known only as the Academy and becomes the unwilling test subject of a failed experiment. Now armed with the ability to spray a toxic mist that causes others to fall in love with him, Alex soon becomes commander of the Chaff, a diverse squadron comprised of twelve empowered survivors of the Academy’s strange machinations. With the support of a mysterious organization called Carpathia, Alex and the Chaff work together to put an end to the Academy. To do so, they must fight against the Crux, a rival group of successful human test subjects who now serve the Academy by undertaking their own mission to forcibly colonize the last resisting planet in the galaxy. Driven by their unshakeable belief in humanity, the Chaff won’t stop until every member of the Crux turns away from Academy control. However, Alex's noble vision is soon challenged when alien mysteries and human betrayals blur the lines between good and evil and turn the truth into something he no longer recognizes.

Bryan David Sandberg is a gay Filipino-Canadian writer based in Calgary, Alberta, Canada. His work has been featured in theatre festivals and stand-up comedy shows, and his hobbies include anime and video games, which both heavily influence his writing. Chaff – Book One: Scars of the Past is his first novel and the beginning of the Chaff series.