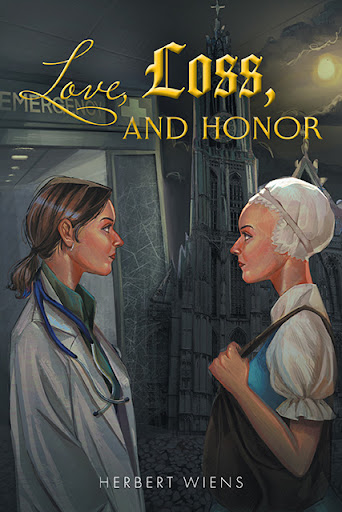 This is a tale of two women, separated by over four hundred years, whose lives are inexorably intertwined.

Karen is a goal-driven pre-med student pursued by two men. Well-bred and wealthy, Martin aligns with her upward ambitions. Peter, her virtuous but poor blue-collar study partner, is loyal and kind but socially inept. After a series of relationship stumbles, an accidental pregnancy forces vacillating Karen to choose Peter. She tries to commit to him, however, after a decade of marriage, nurse practitioner Karen is depressed. Convinced her blue-collar trailer park life has become a mausoleum of mediocrity, she makes some bad decisions which place her in grave danger.

Mariken awakens with amnesia in 1572 Antwerp during the early stages of the Eighty Years’ War. Taken in by kind Mennists, she discovers she has a physician’s gift for healing. She meets and falls in love with Pieter, an injured blacksmith with a mysterious past of his own. Unfortunately, her haunting history, inability to remain quietly obscure, and the rising violence against Mennists combine to threaten her safety. Soon, Mariken and her friends, Maeyken Wens, Lijsken, and Janneken van Munstdorp are suspected of heresy and witchcraft.

How are these two women connected? Will either survive the situations they’ve placed themselves in?

The swiftly paced novel fluidly moves through years with the married couple as well as Mariken’s fraught, centuries-old medical procedures. The tale also features real-life historical figures and events. The book is often grim, with the imprisoned women’s horrid treatment and a minor present-day serial-killer subplot that pays off by the end. The love stories, meanwhile, are enthralling and realistic; for example, Karen and Peter’s mutual fondness doesn’t mean they don’t bicker.

Herbert Wiens was raised in a blue-collar environment. Until he was old enough to drive, he spent his summers picking strawberries, raspberries and string beans along with every other kid in the Willamette Valley. Although drafted into the military during the late Viet Nam War era, he was never sent “In Country.” Instead, he went where Uncle Sam sent him. He has worked on North Idaho ranches, spent a couple of decades in the timber industry, and now is a small business owner. Ask anyone who has ever been within earshot of him (which is quite a distance considering his outdoor voice), he is an avid story teller. As with any teller of tales, facts only tangentially influence his ramblings. Unless the story is about actual history. Historical facts, pleasant or otherwise, are sacred and should be treated as such.