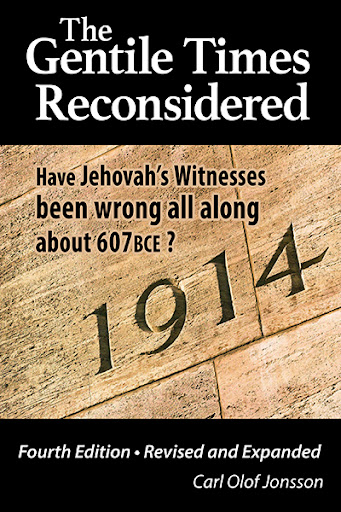 The Gentile Times Reconsidered
Have Jehovah's Witnesses Been Wrong All Along About 607 BCE?
by Carl Olof Jonsson

The Gentile Times Reconsidered, by Swedish author Carl Olof Jonsson, is a scholarly treatise based on careful and extensive research, including an unusually detailed study of Assyrian and Babylonian records relative to the date of Jerusalem’s destruction by Babylonian conqueror, Nebuchadnezzar.

The publication traces the history of a long string of interpretation theories connected with time prophecies extracted from the Bible books of Daniel and Revelation, beginning with those from Judaism in the early centuries, through Medieval Catholicism, the Reformers, and into nineteenth century British and American Protestantism. It reveals the actual origin of the interpretation which eventually produced the date of 1914 as a predicted year for the end of “the Gentile Times,” a date adopted and proclaimed worldwide to this day by the religious movement known as Jehovah’s Witnesses. The importance of this date for the exclusive claims of the movement is repeatedly stressed in its publications.

“For 38 years prior to 1914, the Bible Students, as Jehovah’s Witnesses were then called, pointed to that date as the year when the Gentile Times would end. What outstanding proof that is that they were true servants of Jehovah!”

The book contains a helpful discussion of the application of the Biblical prophecy regarding the “seventy years” of Babylonian domination of Judah. Readers will find the information refreshingly different from any other publication on this topic.

A “most valuable [work]….I have already drawn the attention of a number of correspondents to it.”

—Donald J. Wiseman, Emeritus Professor of Assyriology in the

“An original and thoroughly serious study.....Time and again during my reading I was overcome by feelings of admiration for, and deep satisfaction at, the way in which the author deals with arguments related to the field of Assyriology….. Jonsson demonstrates, with the aid of irrefutable arguments, the invalidity of Jehovah’s Witnesses’ theory that 607 B.C. was the year when Nebuchadnezzar II, in the eighteenth regnal year, desolated Jerusalem.”

—Luigi Cagni, Professor of Assyriology at the University of Naples, Italy (in his

Foreword to the Italian edition).

Carl Olof Jonsson is an outstanding scholar. He has a thorough knowledge of the history of the Assyrian and Neo-Babylonian Empires plus the timing of the conquest of Jerusalem by Nebuchadnezzar II, the King of Babylon. He is also thoroughly aware of the importance of astronomical dating for events that occurred from 587 BCE to the fall of Babylon to the Persians. Jonsson is fluent in several modern languages beyond his native Swedish, including knowledge of Biblical Hebrew. He was therefore able to keep in contact with numerous specialists in his field of research. His general thesis in The Gentile Times Reconsidered is greatly respected by many outstanding academics as a careful reading of this book will demonstrate.