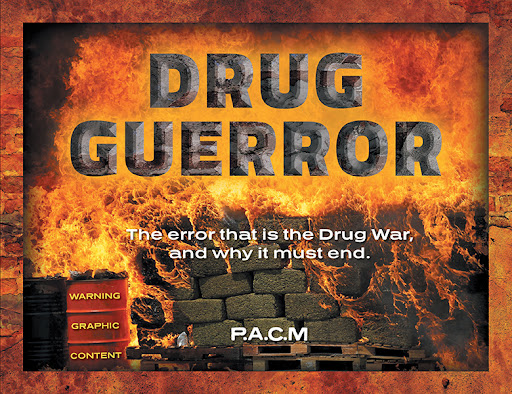 Drug Guerror
The error that is the Drug War, and why it must end.
by P.A.C.M

Timely and relevant, Drug Guerror addresses the damaging and tragic results of criminalizing people in relation to drugs, better known as the global War On Drugs/Drug Prohibition.

The title of the book contains the Spanish word for war, guerra, combined with the word “error,” calling the Drug War what it is: a massive error. P.A.C.M highlights the uselessness of the War On Drugs, as well as the added harms of Drug War policies, including elevated gang membership and violence, excess incarceration and death, as well as tainted drug supply due to the absence of proper regulation. He also provides a variety of resources for people to use in the fight against the criminalization of drugs and the push toward alternative policies.

Straightforward and accessible to younger readers, Drug Guerror will spur conversation and challenge traditional thinking on this serious issue.

P.A.C.M has been researching the impacts of the War on Drugs for over a decade. He brings his passion, concern, and knowledge to the table as he challenges readers to stand up and oppose these harmful drug policies wherever they exist.