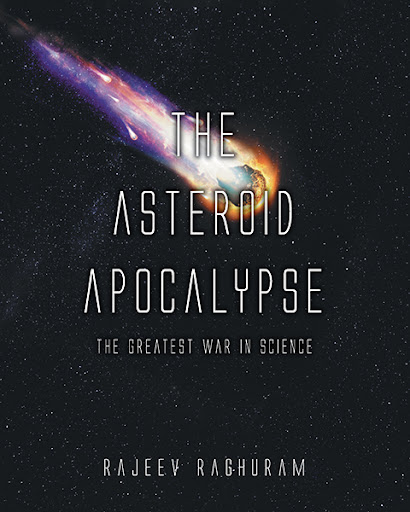 The Asteroid Apocalypse
The Greatest War in Science
by Rajeev Raghuram

We all know what happened to the dinosaurs. Unable to do anything but observe, they watched as an asteroid hurled itself into Earth’s atmosphere and experienced the ramifications of the asteroid’s impact on the planet. Factors such as mass, velocity, type, and trajectory resulted in the extinction of seventy percent of life on Earth. Millions of years later, are we prepared for our battle against this same opponent?

The Asteroid Apocalypse is an educational, nonfiction account of the asteroid threat to life on Earth. Detailing the latest science and technologies, The Asteroid Apocalypse guides readers through simulations and space missions that study the asteroid threat. Author Rajeev Raghuram provides readers with the historical context and accessible data to create a holistic understanding of the many potential threats Near-Earth Objects (NEOs) and Potentially Hazardous Objects (PHOs) pose to Earth, as well as how scientists and astronomers around the world prepare to respond to these possible threats. Young readers and aspiring space engineers, astronomers, and scientists everywhere will enjoy this introduction into the world of space rocks swirling around our planet and how we can work to ensure a fate different to that of the dinosaurs.

At just sixteen years of age, Rajeev Raghuram is the debut author of The Asteroid Apocalypse. Inspired by his love of science and astronomy, and encouraged by a cast of supportive family and teachers, Rajeev uses his debut publication to educate others on asteroids. Captivated by outer space and the dangers that lie just beyond Earth’s atmosphere, Rajeev presents a well-researched introduction into NEOs, PHOs, and the technologies, programs, and missions that explore how we can protect ourselves from these threats. Planetary defense is at the forefront of the work being conducted by NASA and other space agencies, and The Asteroid Apocalypse is a glimpse into why it should also be at the forefront of our minds.

Outside of science and astronomy, Rajeev is passionate about American football and religiously follows NFL season focusing on player statistics and the play books. The intense data science associated with football is strongly linked to his passion for astronomy.