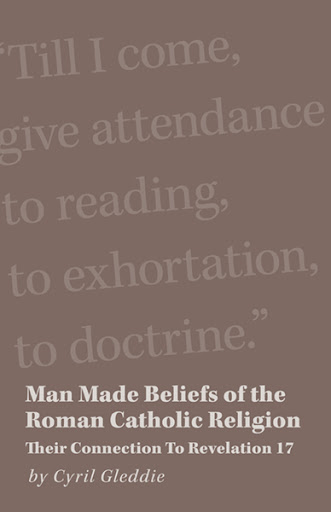 Are you religious? Do you believe that by following a set of rules, you will gain access to heaven? Are you Roman Catholic? If you answered yes to any of those questions, you need to read this book!

The Roman Catholic Church has created many man-made beliefs that are not actually based in Biblical truth. The Catholic religion declares that it is necessary to follow their rules to get into heaven, and they threaten excommunication if their congregation refuses to believe or practice their beliefs. In this book, we will examine in detail the claims made by the Roman Catholic Church, giving both Biblical and scientific evidence for every claim made within.

There is only one lesson to be learned from reading this book: if what you believe and practice is different from the what the Bible says, it is wrong. The Bible is the only source of truth, and this is the place to learn why, exactly, that is so.

"In 2016, Cyril Gleddie published his first book, Roman Catholic Beliefs: God's or Man's? This 400-page book deals with what I believe to be every Biblical divergence from the truth that is characteristic of Roman Catholic dogma, doctrine and tradition. Gleddie deals with every piece of missed or misused scripture. He catches all of them, even those which are often overlooked by others who have written on the subject. He does it kindly, yet firmly, and without compromise.

Gleddie grew up in a ranching family in Tilley, Alberta. He has been involved with the Evangelical Free Church, Baptist Churches, and lately, with the Beulah Alliance Church in Edmonton. Gleddie has three children and a wife of 40 years. He has faithfully served his Lord Jesus Christ in youth work, music ministries, and as a church board member. Gleddie worked as a paramedic and fireman for 30 years with the City of St. Albert Fire Department. During that time, he was a member of the Christian Firefighters Association and its president for two years. Since retiring, Gleddie has enjoyed driving big trucks, mostly in the western provinces. He is a man of the road, and yet, he found time to write a sequel to his first book.

Gleddie's concern for Roman Catholics goes back to his school days. He hurts over his Catholic friends' profound ignorance of what the Bible really teaches, and as a result, their lost condition. I highly recommend that readers dig deeply with Gleddie in the search for the truth."

Cyril Gleddie was raised in a home that read and studied the Bible daily. He has read the Bible through many times and has researched Roman Catholicism for many years. This is his second book dealing on the subject. The first is titled Roman Catholic Beliefs, God’s or Man’s?

Cyril lives in St. Albert, Alberta, with his wife, Annette.