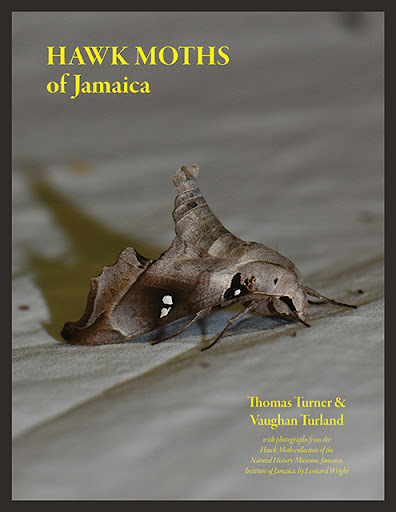 Hawk Moths of Jamaica
by Thomas W. Turner and Vaughan A. Turland

Jamaica was initially one of a few locations in the New World where early collections of hawk moths were made by visiting naturalists including Sir Hans Sloane, Philip Gosse, and natural history illustrator Luke Robins. From this material several species of hawk moths, new to science, were first described by Carolus Linnaeus (1707-1778), Dru Drury (1724-1803), Johan Phillip Fabricius (1745-1808) and others. In the subsequent centuries the known number of Jamaican hawk moth species has gradually grown with new records noted in individual descriptions or in species lists. However, there has been no single illustrated publication specifically devoted to Jamaica’s hawk moths. Our book, “Hawk Moths of Jamaica”, for the first time provides photographs, descriptions, and distribution maps of all species recorded from the island.

Tom has studied the Jamaican Hawk Moths and their life histories for the last fifty-five years, but this interest really began more than seventy years ago, initiated by the curiously bright black-and-yellow-banded Pseudosphinx tetrio (L.), larvae with red heads swarming on a pink Frangipani tree in the garden. Jamaican butterflies were his first interest, earning him a doctorate degree at the University of the West Indies in 1971 for a thesis entitled "Studies on the Biology of the Pieridae (Lepidoptera) in Jamaica". After a short time teaching at the University Tom continued his career in pest protection of tropical fruit crops in Jamaica before completing his professional career with the Florida Department of Agriculture and Consumer Services in 2012. Tom is a long-standing Fellow of the Royal Entomological Society of London, and a Research Associate of the McGuire Center for Lepidoptera and Biodiversity, Florida Natural History Museum, Gainesville Florida.

In 2008 Tom began a highly successful collaboration with field naturalist and wildlife photographer Vaughan Turland in Jamaica leading to the joint publication of "Discovering Jamaican Butterflies and their Relationships around the Caribbean" in 2017 as well as a number of other publications on Jamaican butterflies. Present interests include the conservation of Jamaican butterflies and their habitats, and the commencement of investigations into a number of Jamaican moth families beginning with the "Hawk Moths of Jamaica".

Vaughan is an experienced field naturalist and wildlife photographer who has worked largely in western Jamaica. Here he has been photographing Jamaica’s butterflies, many for the first time. His photography of immature stages of a number of previously undocumented butterfly life histories has provided new insights into determining previously uncertain taxonomic relationships and origins. His extensive catalogue of butterfly images includes unique photographs of mating Pterourus homerus (Fabricius) and other rarities such as Cyanophrys crethona (Hewitson), Nesiostrymon shoumatoffi (W. P. Comstock & Huntington), Phocides perkinsi (Kaye), and the first photographs of the female of Grais juncta Evans which is still undescribed.

Vaughan discovered a new butterfly in the rugged Cockpit Country that was determined to be Jamaica’s first endemic butterfly genus, Troyus Warren & Turland. He has also recorded a second species of Moth Butterfly, Macrosoma cascaria (Schaus), not previously known from Jamaica and has contributed to several research papers. Vaughan is a Fellow of the Royal Entomological Society of London and is a Research Associate of the Windsor Research Centre in Trelawny Parish, Jamaica.