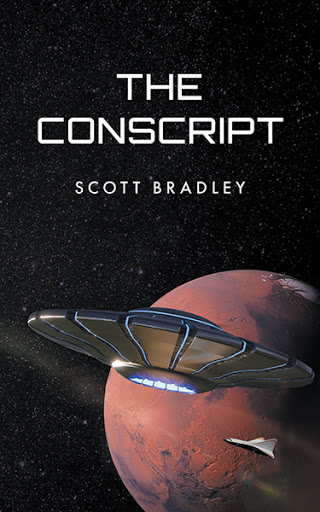 The Conscript
by Scott Bradley

In a solar system with five planets, each with its diverse race of people, skin color, and beliefs, war breaks out between Cronos and Atheni. The Athenians land six battalions in a small town on the Southern Ocean of Cronos and fight their way north. The Cronish soon discover the Athenians are born warriors, ruthless, and relentless, and the defending Cronish are like lambs brought to slaughter.

The Queen of Cronos scrambles to defend her planet while her daughter, Princess Charline, heads off on a mission of her own making.

As more Athenian troops land and cities collapse, two young Cronish girls, Rose and Ebony, escape to a space freighter. Subsequently, the ship and all on board are conscripted into the army.

Here is a tale of wondrous worlds, mysterious intrigue, and non-stop suspense. Discover shocking revelations, ponder baffling mysteries, and then watch to see if someone will turn to face their seemingly indestructible enemy and provide the Cronish people with some semblance of hope.

Scott Bradley loves to spend time with his children and grandchildren, play piano, saxophone, flute, delight in a chess game, and, of course, write sci-fi novels. He lives in Ottawa, ON, Canada, with his partner, Ginette.