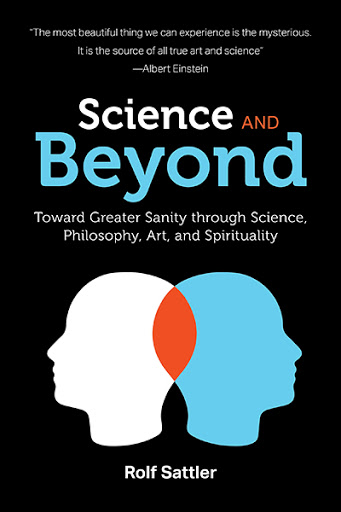 Science and Beyond
Toward Greater Sanity through Science, Philosophy, Art and Spirituality
by Rolf Sattler

Science, coupled with technology, has become the dominant force in most parts of the world. Thus, it affects our lives and society in many ways. Yet, misconceptions about science are widespread in governments, the general public, and even among many scientists. Science and Beyond explores these misconceptions that may have grave and even disastrous consequences for individuals and society as was evident during the COVID-19 pandemic, where they led to much unnecessary suffering, sickness, and death.

“I have argued for the need for and the possibility of a worldview grounded in science, yet one that does not deny the richness of human nature and the validity of modes of knowing other than the scientific…the union of wisdom and compassion.”

"Rolf Sattler's book Science and Beyond will be inspiring reading for all human beings concerned about the meaning of their existence, the welfare of humanity and the preservation of life on the planet Earth. For many human beings science itself has become a sort of dogmatic religion with an attitude that extra scientia nulla veritas, thus reducing the grandeur of Truth which according to the great sages is intimately intertwined with Love and Beauty. Scientific research is important and necessary but it has its limitations. A connection with other levels of Reality is necessary for nourishing the human spirit as is rigorously pointed out in this book."

- Ravi Ravindra, Professor Emeritus of Physics, Philosophy, and Comparative Religion, author of Science and Spirituality and Science and the Sacred.

“Science and Beyond is a powerful claim for integrating the limitations of science in our overall perception of reality, for recovering the fullness of life experience from the abstraction of scientific modelling, the unnamable from the named, wisdom and sanity from the infatuation with technological power. Such a return to balance and wholeness is crucially important not just for the survival and well-being of the human species, but also for the blossoming of life in all its forms.”

- Shantena Augusto Sabbadini, author of Tao Te Ching: A Guide to the Interpretation of the Foundational Book of Taoism and Pilgrimages to Emptiness: Rethinking Reality through Quantum Physics.

Rolf Sattler, PhD, DSc (hc), FLS, FRSC, is Professor Emeritus of McGill University in Montreal, where he carried out research in plant morphology on the development and evolution of plant form. He published nearly a hundred research papers and several books, including the triple award-winning Organogenesis of Flowers and Biophilosophy. Consequently, he received many awards and honours. At McGill University he taught courses in plant biology, general biology, the philosophy and history of biology, biology and the human condition. In addition, he lectured at many institutions and universities around the world, including Harvard University and the Universities of California, Berlin, Zurich, Delhi, Malaya, and Singapore. And he was a speaker at many national and international conferences and congresses. For the Dalai Lama’s 60th Birthday Celebrations he gave a talk on Life Sciences and Spirituality.