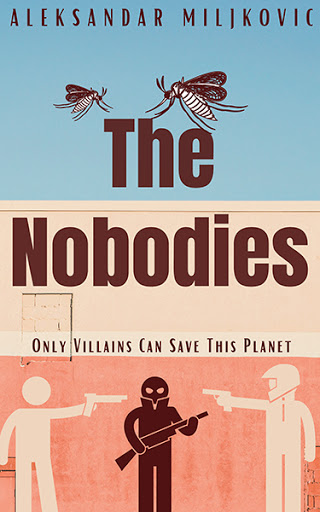 The Nobodies
Only Villains Can Save This Planet
by Aleksandar Miljkovic

How can anyone determine if someone is a hero or a villain? Most people believe it’s through their actions. But what if someone’s actions seem cruel now, but they’re being done to bring about a “better tomorrow”?

Connor Jones has spent the last thirty years of his life leading a secret organization called The Nobodies. They hire a select group of regular people with no police record to murder those whom The Nobodies deem to be the most dangerous people in the world, paying them huge amounts of money to do so and thereby making the murders almost impossible to solve. Despite the fact they are killing people, The Nobodies think they are saving many human lives and maintaining the balance on this planet.

However, everything changes when Connor begins to think the group is getting too big, and he starts to target some of the assassins themselves. He comes to believe that, good or bad, all humans are the biggest enemy this world has ever faced, and Connor decides the only way to save this planet is to become its greatest villain.

Aleksandar Miljkovic is passionate about books, movies, and TV shows, and he’s finally decided it’s time to start writing some stories of his own.

Currently, he lives with his wife, Shenalyn, their dog, Maximus, a stuffed toy rabbit named Mica, and their fighting fish, Rocket, in Whistler, B.C., Canada. He has lived in three countries on three different continents while working in five-star hotels. Back home in his native Serbia, he has two turtles named Rafaelo and Klea, who have been his pets for twenty-seven years.

The Nobodies is Aleksandar’s first novel.