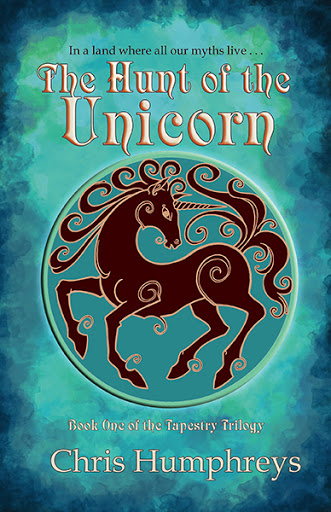 The Hunt of the Unicorn
by Chris Humphreys

THE UNICORN TAPESTRIES IN NEW YORK are a medieval masterpiece—

and a mystery. No one knows who wove them, who for, or when.

Elayne knows . . . kinda. At least, she’s been told by her father that their ancestor wove them. Not only that, he left a doorway in the tapestries which opens onto Goloth, the Land of the Fabulous Beasts. She doesn’t believe any of it—until, on a class trip to the museum, she is summoned through the tapestries by Moonspill. A real, live unicorn.

Moonspill and her weaver-ancestor had made a pact: that if either of them were desperate, they (or their descendants) would come to the other’s aid. Moonspill’s mate is about to be slaughtered in the arena by a tyrant king. He needs a maiden to tame him so he can enter the world of man and free her.

Elayne knows nothing about taming—she barely passed calculus! But through some extreme adventures in that magical land she realizes something: if human myths are true in Goloth, why not the one where a unicorn can cure all poisons—including the cancer in her father’s blood?

Attacked by a griffin, befriended by a talking snake, pursued by a lecherous king, Elayne must somehow find the skills and the courage she needs to save the two beings she loves most in either world: her father and her unicorn.

‘The Land of the Fabulous Beast is, in a word, fabulous, a place where all the creatures dreamed up by various cultures are portrayed in all their glory… Hand this to readers who like their heroines sassy and their settings vividly imagined.’

– Bulletin of the Centre of Children’s Books –

‘The Hunt of the Unicorn is one of the best fantasy books for young adult readers to be written in the last few years. It has a good story with the fast plot typical of an adventure. By weaving historical elements into the modern world, the author has created a parallel world of wondrous beasts such as the types that would be found in a medieval bestiary.’

'Immensely appealing... keeps readers on their toes through to the end.' Booklist 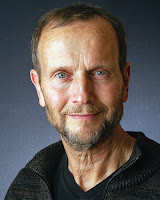 CHRIS (C.C.) HUMPHREYS has played Hamlet in Calgary, a gladiator in Tunisia, and a dead immortal in Highlander; he’s waltzed in London’s West End, conned the landlord of the Rovers Return in Coronation Street, commanded a starfleet in Andromeda, and voiced Salem the cat in the original Sabrina. He has published 18 novels including The French Executioner, The Jack Absolute Trilogy; Vlad – The Last Confession; A Place Called Armageddon; and Shakespeare’s Rebel. His novel Plague won the Arthur Ellis Award for Best Crime Novel in Canada in 2015. He is now writing epic fantasy with the Immortals’ Blood Trilogy, for Gollancz; the first book, Smoke in the Glass, was published in 2019. He has an MFA in Creative Writing from the University of British Columbia. He wears a unicorn signet ring and always wondered why. The Hunt of the Unicorn begins to answer that question.

The Hunt of the Unicorn will be available in the FriesenPress Bookstore soon.