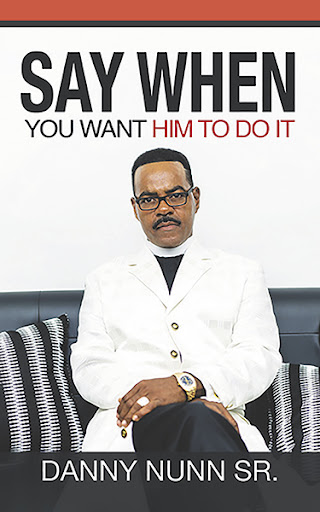 Say When
Releasing the Miraculous Power of Your Faith
by Danny Nunn Sr.

Say When was birthed out of the supernatural power of God. While in New York doing mission work, Danny Nunn Sr. received a visit from the Spirit of God. God showed him Habakkuk 2:2 and told him to write the vision and make it plain so that the people who read it would understand it.

The book focuses on the supernatural and how to release the unknown and obtain more faith. It’s filled with positive, biblical background and principles right out of the Word of God. It also shows readers how to walk by faith and release that faith. The international Christian television station T.B.N., one of the largest television networks in the world, praises the book as a resource for Bible studies and going into deeper levels of faith. Readers learn how to speak their faith, think about their faith, and act on their faith.

Things just don't take place—you have to make things happen as you release your faith in God. This is a book about miracles that are taking place right now!

TBN: The Trinity, broadcasting, Network stated that it was an awesome book to help strengthen the faith of believers and unbelievers alike. And that it would be a good bible study tool for ministry.

Danny Nunn Sr., author of Say When, is the proud father of three children and the husband of the late Dr. J.C. Nunn, his wife of thirty-eight years. During his wife’s illness, Say When was birthed in him by the Spirit of God.

When he was only a child, Mr. Nunn looked into heaven and felt that God had a purpose for his life. In the 1980s, he had a vision of God holding him in his hand and moving him around, showing him the things He wanted him to do, including full-force ministry for Him. He and his wife led so many people to the Lord that they lost count of how many made a commitment to Christ. They saw people healed from cancer, high blood pressure, and a variety of incurable diseases. They were on the radio and television, and in 2000 they started their own television ministry called Miracle Atmosphere.

You can visit Bishop Danny Nunn Sr.’s Facebook page and email him at bishopdannynunnsr@gmail.com.