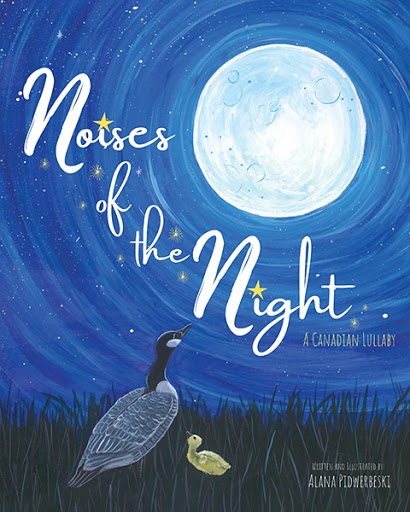 Noises of the Night
A Canadian Lullaby
by Alana Pidwerbeski

The noises of the night

They sing you lullabies

The oceans of the coasts, the winds in the North, and everything in between provide a backdrop for this Canadian lullaby. With unfamiliar noises made comforting, children will relax to the sounds of frogs, wolves, owls, and even city traffic as the gentle rhythm of the lullaby carries them to sleep.

Highlighting Canada’s diversity in geography and animal life, Noises of the Night is sure to become a bedtime favourite across the country and beyond.

Passionate about helping children learn and grow, Alana has taught Karate to preschoolers, Nannied, and volunteered to run kids’ programs at the community centre. Her Bachelor’s degree combined her love of culture (Anthropology) with her love of books (Literature), but she was missing her creative side. One noisy, sleepless Toronto night, she was inspired to write Noises of the Night and realized that writing and illustrating books was where her heart was happiest.

Alana lives in B.C.’s sunny Okanagan Valley. When she isn't writing or painting, she can be found dancing around her house singing at the top of her lungs (much to the disappointment of her neighbours) or cooking delicious meals. She believes in hugs, holding doors open for others, and petting as many dogs as is possible.

She respectfully acknowledges that she lives and works on the traditional unceded and ancestral territory of the Syilx peoples.