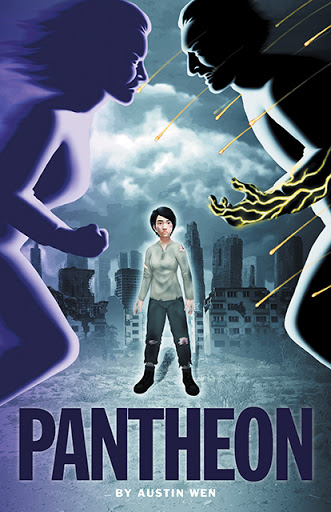 It’s been ten years since the Great Enhancement, and the world still hasn’t recovered. Superhero tropes from the world before the Enhancement, which Reine, a thief, had never lived in, split their morality into black and white. The metahumans hired by the government to hunt their own became “heroes,” and the rest were forced into the role of villains.

When Reine’s parents are killed after trying to rob a metahero’s mansion—a murder justified in every right and law—she must make her own justice in a world where the lines between right and wrong are corrupt and unclear. Even if it means she has to join forces with the most powerful metavillain in North America, Pantheon, by enlisting at his school for villains-in-training.

Reine’s new roommate at Pantheon’s Academy is an outcast named Sky. Blamed for the death of her father—a powerful metavillain who many looked up to—Sky sees the newcomer Reine as a source of redemption: by betraying Reine, Sky will prove to her peers that she is a ruthless metavillain worthy of respect.

However, the more the two get to know each other, the more complicated things become. And with metaheroes closing in on the Academy, Starflight at the helm, unlikely alliances must be made if either student is able to prevail. Reine and Sky, both friends and foes, soon find themselves on similar paths leading into the dangerous unknown.

Austin Wen has been an avid reader since childhood. In lower school in Shanghai, encouraged by his mother, he developed a passion for reading English novels, which built the foundation for his growing proficiency with the language. After moving to Taiwan, where he attended middle school, reading was his anchor in the familiar, opening doors to his personal aliveness and learning beyond the classroom. Wishing to return the favor and help other kids along their own emotional journeys, he wrote his first book, Pantheon: book one in a forthcoming series called The Pantheon Duology. His novel is the winner of a National Silver Medal in the Scholastic Art & Writing Awards. He currently lives in Portland, Oregon, with his parents, grandma, sister, and their rabbit, Spotty.