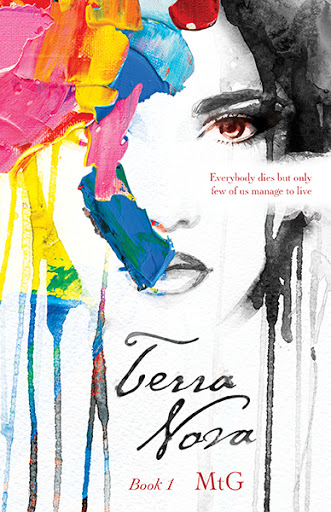 Evangeline is living the life of a normal teenager—going to school and hanging out with friends—until mysterious, severe symptoms begin appearing. After passing out in the middle of a party, life as she knows it spirals beyond her grasp. She is then diagnosed with a rare, genetic blood disorder that causes her body’s white blood cells to kill the red ones. In the delirium of her deteriorating health, a door to a parallel world opens before her; however, once she steps through it, the portal closes, and she is unable to return to Earth.

The place Evangeline now finds herself in is called Terra Nova, a world wherein vampires rule supreme, with no traces of humanity left to speak of. Curious but afraid, she quickly learns that Terra Nova is not the shadow-side of Earth, but rather the tragic result of government experimentation. In order to survive, she must keep her mind open and accept the changes her body is undergoing; soon enough, those who she initially thinks are murderers become her trainers, whose help she must enlist if she ever hopes to return home—and soon enough, a romantic bond begins to bloom.

Meanwhile, Evangeline’s brother and friends back on Earth try to figure out what happened to her, and how the government is involved, and how to bring her home. Unbeknownst to any of them is the mysterious outcast Bambi, whose secrecy disguises her power in making a devastating choice: save one world at the risk of destroying the other.

Everybody dies but only few of us manage to live

MTG has worked in numerous positions, mainly in managerial and executive roles. These include the editor-in-chief of a cultural magazine, an executive director, and most recently, the manager of a non-profit organization that works with immigrants and refugees. She has extensive experience working and studying abroad, including Germany, Italy, Korea, Abu Dhabi, and Pakistan; these experiences taught her about many cultures and worldviews, which influenced her writing.

Terra Nova, her first publication, is Book 1 of a series. The series’ concept emerged when she, like the protagonist, was diagnosed with the blood disorder paroxysmal nocturnal hemoglobinuria (PNH), and her then-boyfriend (now husband) joked she was becoming a vampire. She currently works and resides in Canada.