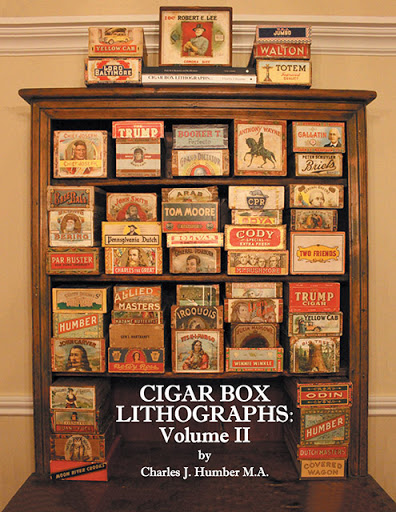 Just as this publication was ready for the

on an internet auction site. Recognizing

its rarity and extraordinary appeal,

a decision was made to bid on it with

the hopes of purchasing it. As author, I

won. But I also knew that it was too late

to include this Davy Crockett cigar box

alongside the more than 100 other cigar

boxes already headlined and profiled in

this particular 200-page volume. After

winning the bid a final decision was

made to illustrate this cigar box on the

back cover of this production. In so doing readers have a chance to scrutinize a very rare and a one-of-a-kind cigar box. Of course, any cigar box that lithographically headlines Davy Crockett usually identifies the famous American frontiersman with the Alamo (see this Volume, page 114) and how he and 200 Texans were killed in 1836 by Santa Anna’s 1500 strong Mexican forces. A wide-spread interest in Davy Crockett ever since has become the norm. Tennessee Ernie Ford popularized him in 1955 with his hit “The Battle of Davy Crockett”. John Wayne immortalized Davy Crockett when he played the famous frontiersman in the 1960 Hollywood blockbuster, The Alamo. The stunning lithographic print on the inside lid of a wooden cigar box made by William Simpson of Massachusetts, circa 1900, now highlights this back cover of this book and demonstrates the ultimate bravery of a young Davy Crockett protecting individuals inundated with a blizzard and petrified of wolves trying to push their way into the pioneer Log Cabin (see this Volume, pages 108- 109) that the legendary frontiersman is valiantly guarding and resolutely defending. This Davy Crocket lithographic print is one of the highlight prints of the book....

Charles J. Humber was born in St. Lambert, Quebec, July 14, 1936. A graduate of Temple University, B.A. (1962), and the University of Wisconsin, M.A.(1970), Humber also attended the University of Alaska (Fairbanks Campus, 1960-1961). He also was fortunate to study under Prof. H. Northrop Frye, a world- famous literary scholar at the University of Toronto (1969-1970). Humber and his wife, Gayle Jenkins, a native Californian, are the proud parents of two daughters, Kristan and Karyn, and twin sons, Charlie and Scott. Following a twenty-year career as a high school teacher, Humber entered the publishing world when he edited LOYAL SHE REMAINS, a best seller launched to coincide with the 1984 Ontario Bicentennial celebrations. At the time he was the National President of the United Empire Loyalists’ Association of Canada. In 1986, Humber co-founded Heirloom Publishing Inc. which produced the nationally acclaimed, seven volume CANADA Heirloom Series (1986-2001). In semi-retirement, Humber has continued to publish books, including FAMILY SLEUTHING (2006) and Dad’s Best Memories (2016), two volumes that trace, among other matters, his family’s links to the American Revolution. CIGAR BOX LITHOGRAPHS, Volume I (2018), unquestionably reveals Mr. Humber’s passion for collecting vintage cigar boxes and has led him to revisit the world of cigar boxes with his supplementary CIGAR BOX LITHOGRAPHS, Volume II, another jammed packed production filled with dramatic and historic images. Both volumes I and II are destined to be highly collectible books pursuing forgotten history. Both are much like portrait galleries accompanied with historic vignettes that truly uncover the past and peer at the inside lids of these cigar boxes that have been relegated to the bone-piles of time.